With cash flow drying up at Thailand's popular beach resort of Phuket, hotels are racing to restart tourism -- starting with local travelers. "If nothing changes in the next three months, we won't be able to afford paying for staff," said Angkana Tanetvisetkul, president of the Kata Karon Business Association, which represents more than 40 locally owned hotels in Phuket. Across Southeast Asia -- one of the most tourism-reliant regions in the world -- hotels and travel businesses are slowly kicking into gear after countries like Thailand and Vietnam successfully flattened their virus infection curves and began easing lockdown restrictions. While international leisure travel is still a long way off, hotels and airlines are slashing rates to lure locals. Even in countries where infection rates are still a worry, like Indonesia and Singapore, governments are hoping to reopen tourist hot spots like Bali and restart business travel to China and elsewhere. 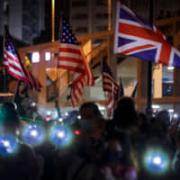 PHUKET, THAILAND – Hotels on Thailand's most popular holiday island have been forced to slash prices with rooms left vacant and beaches sparse as tourist chiefs struggle with a plunge in Chinese visitors caused by the U.S. trade war and a stronger baht. Located on the Andaman Sea and known for its beaches and nightlife, sun-drenched Phuket was the most visited destination in the country last year after Bangkok and remains a good gauge of the state of its crucial travel industry. Tourism accounts for 18 percent of Thailand's gross domestic product and Chinese vacationers make up more than a quarter of total arrivals. But while 2.2 million people from the country visited in 2018, according to official figures, numbers for the January-September period were down almost a fifth year on year. Claude de Crissey, honorary consul of France in Phuket and owner of about 40 rooms in the popular Patong Beach area, said Chinese tourists are usually present even during the low season.

Anti-China sentiment spreads along with coronavirus, especially among neighbors wary of territorial aims

JAKARTA/HANOI – The coronavirus outbreak has stoked a wave of anti-China sentiment around the globe, from shops barring entry to Chinese tourists, online vitriol mocking the country's exotic meat trade and surprise health checks on foreign workers. The virus, which originated in China, has spread to more than a dozen countries, many of them in Southeast Asia, which has sensitive relations with China amid concerns about Beijing's vast infrastructure spending and political clout in the region and sovereignty disputes in the South China Sea. Authorities and schools in Toronto were moved to warn against discrimination toward Chinese Canadians, while in Europe there was anecdotal evidence of Chinese residents facing prejudice in the street, and hostile newspaper headlines. "Orientalist assumptions plus political distrust plus health concerns are a pretty powerful combination," said Charlotte Setijadi, and anthropologist who teaches at Singapore Management University. Chinese authorities have said the virus emerged from a market selling illegally traded wildlife, giving rise to widespread social media mocking of China's demand for exotic delicacies and ingredients for traditional medicine.

Thailand aims to turn away from mass tourism and target wealthy

Thailand's tourism-revival strategy is to target big spenders seeking privacy and social distancing in the COVID-19 era, rather than try to attract a large number of visitors. The pandemic provides an opportunity to reset the sector, which had become reliant on Chinese groups and backpackers. Once the country's borders are reopened and so-called travel bubbles are agreed upon, marketing efforts will be geared toward wealthier individuals who want holidays with minimal risks, Tourism Minister Phiphat Ratchakitprakarn said in an interview. The government will initially allow a small number of arrivals, such as some business executives and medical tourists. It is also working with the travel industry to identify and invite individuals in target demographics, which will probably include previous visitors to luxury resorts in the islands of Phuket, Samui, Phangan and Phi Phi, the minister said.

ASEAN member states boast rich tourism resources that are of historic and cultural importance, as well as excellent getaway destinations. They also offer delicious local cuisine and souvenirs of exotic crafts. For Japanese, Southeast Asia is a conveniently located vacation destination. This year, the member states kicked off the "Visit ASEAN@50: Golden Celebration" campaign to mark ASEAN's 50th anniversary. Below are some tourism highlights of the member states -- Brunei, Cambodia, Indonesia, Laos, Malaysia, Myanmar, the Philippines, Singapore, Thailand and Vietnam.