We match different angles, shots and graphics to best suit each scene of your corporate story. Step #4 Develop a call sheet or production sheet. All the details of the production are tabulated into a large spread sheet so that everything and everyone are accounted for every shot.

Working from home: The 12 new rules for getting it right

Maintain eye contact, offer a firm handshake, dress appropriately: the basic rules that define a professional attitude at work are well-established, and office etiquette evolves only slowly. But with the office effectively moving online, many codes that make up business etiquette have now been shattered. Casual calls with team leaders have become a regular occurrence, and virtual pub quizzes are replacing after-work drinks. So what cues can we give over a video-conference to show that we are paying attention? How should we replace water-cooler small talk? 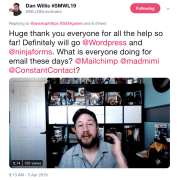 Are you ready for your close-up? Videos are no longer the hottest trend on social media. Your audience expects and might even prefer video to other forms of social media content. The facts speak for themselves. The secret is out: videos work and everyone can see benefits from them.

Leaked video showing a frightened dog being forced into churning water during filming of "A Dog's Purpose" was misleadingly edited and the German shepherd was unharmed, according to third-party findings released by American Humane, the group responsible for overseeing animal safety on the movie set. An independent animal-cruelty expert found that preventative safety measures were in place to protect the dog, Hercules, American Humane said. The board-certified veterinarian, who was not identified, concluded that the dog was momentarily stressed but suffered no lasting ill effects. The group said the outside expert, whose name was withheld because of the public outcry following the video's release, found it to be a misrepresentation of events. "The decisions by the individual or individuals who captured and deliberately edited the footage, and then waited longer than 15 months to release the manipulated video only days before the movie's premiere, raise serious questions about their motives and ethics," American Humane said Friday.

Project Veritas, the controversial investigative publication founded by James O'Keefe and best known best for posting edited undercover video footage that is sometimes doctored, has published a new video claiming to show Twitter employees sharing personal opinions on President Donald Trump, disclosing the company's access to user information on the platform and expressing a willingness to participate in a Department of Justice investigation into the President.