By thinking of atoms as letters and molecules as words, artificial intelligence software from IBM is now employing the same methods computers use to translate languages to predict outcomes of organic chemical reactions, which could speed the development of new drugs.

Researchers have designed a machine learning algorithm that predicts the outcome of chemical reactions with much higher accuracy than trained chemists and suggests ways to make complex molecules, removing a significant hurdle in drug discovery. University of Cambridge researchers have shown that an algorithm can predict the outcomes of complex chemical reactions with over 90% accuracy, outperforming trained chemists. The algorithm also shows chemists how to make target compounds, providing the chemical'map' to the desired destination. The results are reported in two studies in the journals ACS Central Science and Chemical Communications. A central challenge in drug discovery and materials science is finding ways to make complicated organic molecules by chemically joining together simpler building blocks.

IBM's AI learns how to predict the outcomes of chemical reactions

By thinking of atoms as letters and molecules as words an Artificial Intelligence (AI) from IBM is now using the same neural network techniques that other AI's use to translate between different languages to predict the outcomes of organic chemical reactions, and the breakthrough could help speed up the development of new drugs. 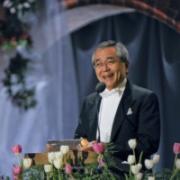 Washington – Japanese chemist Eiichi Negishi who won the Nobel prize for developing a method for creating complex chemicals necessary for manufacturing drugs and electronics has died at age 85, his U.S. university said. Negishi died on Sunday in Indianapolis, Purdue University said in a statement on Friday, adding his family would lay him to rest in Japan sometime next year. His wife, Sumire, died in an accident in 2018. The scientist, born in Manchuria under Japanese rule, graduated from the prestigious University of Tokyo and worked at chemical giant Teijin before going to the United States on a Fulbright scholarship in 1960 to study chemistry. He received a Ph.D. from the University of Pennsylvania in 1963, and was a postdoctoral fellow at the Herbert C. Brown lab at Purdue University from 1966 to 1972.

A new algorithm trained on millions of reactions can tell scientists the steps required to build organic compounds. How it works: Researchers at the University of Manchester trained a neural network on the 12.4 million single-step organic-chemistry reactions currently known to science. That data set lets the network predict more complicated multi-step chains of reactions that produce increasingly complex molecules, without having any chemistry rules hard-coded into the algorithm. Double checking: In a double-blind study, the researchers gave 45 chemists two potential synthesis routes for creating nine different molecules--one each from the algorithm and a human scientist. According to Nature, the chemists didn't prefer one over the other, and eight of the algorithm's suggestions worked properly when tested in the laboratory.