If you're a member of the LGBTQ community, chances are you've been asked the same questions over and over. Did someone or something make you gay? What does transgender even mean? Why do there have to be so many pronouns? It's exhausting, especially because most people's knowledge of the LGBTQ community is limited to what they learned on the playground and a viral clip of Ben Shapiro.

The 'queer aesthetic' is deeper than rainbow merch

Mashable is celebrating Pride Month by exploring the modern LGBTQ world, from the people who make up the community to the spaces where they congregate, both online and off. As well-intentioned as Pride merchandise may be, mullets and cuffed pants capture the "queer aesthetic" far better than anything dripping in rainbow logos. In a TikTok posted in April, Giulia Beaudoin asked viewers why a mirror selfie of someone with green hair, wire rimmed glasses, and black high-top Converse is "so much more gay" than a photo of herself dressed in rainbow suspenders and a hat emblazoned with "PRIDE." "Yes, this was me two years ago, but this should be gay," Beaudoin posited. "This should be so much more gay than the other picture, but it's not. One comment likened the first image to attending a college and the second to wearing the college's merchandise. Another described the first image as an "authentic LGBTQ person in their full self expression" but the second as "giving Target Pride section." 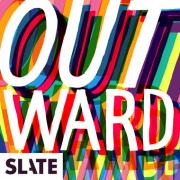 When we founded Outward five years ago this month, we set as the section's tagline: "Expanding the LGBTQ conversation." This was because we wanted to make something a bit different from your standard queer news service or pop-culture blog. In keeping with the larger spirit of Slate, we were after a space for lively debate and passionate argument, surprising insights and challenging thought. In a word, we were thirsty for conversation--the smart, invigorating sort that might go down in the cutest, smartest queer bar (even salon?) of your dreams. However successful we were, though, there was always something a little off about calling a stream of articles and videos a "conversation."

There was just something about her. Maybe it was the plaid flannels. Whatever it was, something about Darlene spoke to queer women. For nine seasons, the character played by Sara Gilbert on ABC's Roseanne was, however subtly, a role model for people who looked at her and saw something of themselves. Darlene wasn't queer, but for the subset of the show's audience that was--myself included--she felt like one of us.