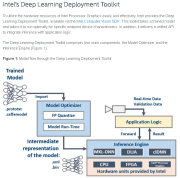 I was wrong to say that Intel (INTC) doesn't need GPUs to compete with Nvidia (NVDA) on artificial intelligence/deep learning computing. Further research told me that along with FPGA (Field Programmable Field Gate Array), there's an embedded Intel Processor Graphics for deep learning inference. It's a new concept that was discussed by Intel only last May. Nvidia's GPU can be the Training Engine for deep learning computers. Intel's FPGAs and embedded Processor Graphics could be the go-to hardware accelerators for inference computing.

Over the last few months we have seen NVIDIA's Pascal GPUs roll out among their consumer cards, and now the time has come for the Tesla line to get its own Pascal update. To that end, at today's GTC Beijing 2016 keynote, NVIDIA CEO Jen-Hsun Huang has announced the next generation of NVIDIA's neural network inferencing cards, the Tesla P40 and Tesla P4. These cards are the direct successor to the current Tesla M40 and M4 products, and with the addition of the Pascal architecture, NVIDIA is promising a major leap in inferencing performance. We've covered NVIDIA's presence in and plans for the deep learning market for some time now. Overall the deep learning market is a rapidly growing market, and one that has proven very successful for NVIDIA as the underlying neural networks map well to their GPU architectures.

Nvidia targets neural networks in the datacentre with new benchmark

Nvidia has announced a series of new benchmarks tracking the performance of tools for running AI inference both at the edge and in the datacentre. The results of the MLPerf Inference 0.5, are the industry's first independent suite of AI benchmarks for inference and help to demonstrate the performance of NVIDIA Turing GPUs for datacentres and NVIDIA Xavier system-on-a-chip for edge computing. Nvidia posted the fastest results on new benchmarks measuring the performance of AI inference workloads in datacentres and at the edge -- building on the company's position in recent benchmarks measuring AI training. 'AI is at a tipping point as it moves swiftly from research to large-scale deployment for real applications,' said Ian Buck, general manager and vice president of Accelerated Computing at NVIDIA. 'AI inference is a tremendous computational challenge.

NVIDIA just announced the Jetson TX2 embedded AI supercomputer, based on the latest NVIDIA Pascal microarchitecture. It promises to offer twice the performance of the previous-generation Jetson TX1, in the same package. In this tech report, we will share with you the full details of the new Pascal-based NVIDIA Jetson TX2! Artificial intelligence is the new frontier in GPU compute technology. Whether they are used to power training or inference engines, AI research has benefited greatly from the massive amounts of compute power in modern GPUs. The market is led by NVIDIA with their Tesla accelerators that run on their proprietary CUDA platform.

Nvidia has released a new version of TensorRT, a runtime system for serving inferences using deep learning models through Nvidia's own GPUs. Inferences, or predictions made from a trained model, can be served from either CPUs or GPUs. Serving inferences from GPUs is part of Nvidia's strategy to get greater adoption of its processors, countering what AMD is doing to break Nvidia's stranglehold on the machine learning GPU market. Nvidia claims the GPU-based TensorRT is better across the board for inferencing than CPU-only approaches. One of Nvidia's proffered benchmarks, the AlexNet image classification test under the Caffe framework, claims TensorRT to be 42 times faster than a CPU-only version of the same test -- 16,041 images per second vs. 374--when run on Nvidia's Tesla P40 processor.