A team of researchers from the University of Manchester announced Monday they had taken a significant step forward in the creation of viable quantum computers. In a study published in the latest edition of the journal Chem, the researchers provided evidence that large molecules made of nickel and chromium could be used as qubits -- the quantum computing equivalent of the bits used to store and process information in conventional computers. According to the study, it is possible, at least in theory, to use molecular chemistry to connect these molecules, thereby creating several stable qubits that can then be used to create two-qubit logic gates. "We have shown that the chemistry is achievable for bringing together two-qubit gates -- the molecules can be made and the gates can be assembled," lead author Richard Winpenny said in a statement. "The next step is to show that they work."

New Twists in the Road to Quantum Supremacy

After decades of hype and headlines, quantum computers are finally poised to demonstrate their superiority over conventional machines. Precisely when this will happen is a bit fuzzy, though. What's more, it will be a while yet before these magical machines will have any noticeable impact on our lives. The point at which a quantum machine should be able to perform computations too complex to model on any conventional machine, a landmark known as "quantum supremacy," is believed to be about 49 qubits, the quantum equivalent of the bits that represent 1 or 0 in a conventional computer. Google's researchers appear to be leading in the race for a 49-qubit machine (see "Google's New Chip Is a Stepping Stone to Quantum Computing Supremacy"). 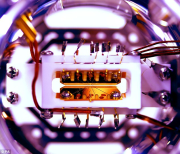 One step closer to quantum computers: 'Dressed' qubit can retain data 10 TIMES longer than before

Building a quantum computer has been called the'space race of the 21st century' – a difficult and ambitious challenge, with the potential to deliver revolutionary tools. Now an invention by engineers in Australia may have brought us one step closer to achieving the goal. The team designed a new kind of quantum bit, which can retain information for 10 times longer than ever previously achieved. The new quantum bit, known as a'dressed qubit' has been designed by researchers at the University of New South Wales, and is made up of the spin of a single atom in silicon, merged with an electromagnetic field (artist's impression) Quantum computing takes advantage of the ability of subatomic particles to exist in more than one state at any time. In traditional computers, data is expressed in one of two states – known as binary bits – which are either a 1 or a 0. But quantum computers use quantum bits, or qubits.

Machine learning to scale up the quantum computer

The high technological and strategic stakes mean major technology companies as well as ambitious start-ups and government-funded research centers are all in the race to build the world's first universal quantum computer. In contrast to today's classical computers, where information is encoded in bits (0 or 1), quantum computers process information stored in quantum bits (qubits). These are hosted by quantum mechanical objects like electrons, the negatively charged particles of an atom. Quantum states can also be binary and can be put in one of two possibilities, or effectively both at the same time--known as quantum superposition--offering an exponentially larger computational space with an increasing number of qubits. This unique data crunching power is further boosted by entanglement, another magical property of quantum mechanics where the state of one qubit is able to dictate the state of another qubit without any physical connection, making them all 1's for example.