The recent iOS 11 firmware leak includes some vital details about the rumored Apple Watch Series 3. The iOS 11 Gold Master leak shows an image of what the rumored'Apple Watch Series 3' could look like. The picture in the Apple Watch app, uploaded by MacRumors, shows the wearable device with a cellular connection symbol, which suggests the new Watch will support LTE connectivity. The Apple Watch looks similar to the current devices on sale. It sports a Space Gray body, a matching band and a bright red digital crown. Here's how the Apple Watch looks like on the app: The firmware's code says the Apple Watch will use LTE cellular network to call and receive calls while the user is away from their iPhone, according to 9to5Mac.

Apple is set to release watchOS 4, the latest Apple Watch update, this fall. The software update will bring multiple features to the device, including improvements with Apple Pay and ways to boost your workouts. The company revealed watchOS 4 at the Worldwide Developers Conference in June alongside iOS 11, for iPhones and iPads, and macOS High Sierra, for computers. There are several watchOS 4 features to be excited about. Apple announced iOS 11 will support person-to-person payments, and it's doing the same with watchOS 4. Users will be able to send and receive money using their Apple Watch.

Apple Watch's long-awaited software update, watchOS 3.2, is finally out of beta. The Cupertino giant is now rolling out the update that brings changes to the operating system of Apple's timepiece series since watchOS 3.1.3. On Monday, Apple released watchOS 3.2 to general users and owners of the Apple Watch and Apple Watch 2 smart devices. The release of the software update comes months after beta testing was launched in late January and following the launch of the seventh beta last week. It also comes months after watchOS 3 became public back in September last year. 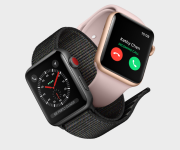 Apple announced the Apple Watch Series 3 at its event Tuesday, which will come with a major upgrade: built-in LTE cellular support. While the Series 3 comes with some new features, not all consumers are ready to get the new version and might consider sticking with the Series 2. For those who are undecided, here's a comparison of the Apple Watch Series 3 Vs. The biggest difference between the Series 3 and Series 2 is the LTE cellular support on the newest model. With the Series 3, users can leave their iPhone at home when running to the grocery store and still be connected. Some apps will switch from the iPhone to the Apple Watch when it detects the smartphone has been left behind.

Apple Pay Cash October Launch: How, Where To Use Near You

The Apple Pay Cash card feature will launch in October after missing the iOS 11 and watchOS 4 release, 9to5Mac reported. Apple revealed new features for Apple Pay, including the Apple Pay Cash card and person-to-person payments, at its Worldwide Developers Conference in June. A footnote at the bottom of the Apple Watch Series 1 website said Apple pay Cash is "coming in late October," 9to5Mac spotted. Meanwhile, web pages for the Apple Watch Series 3 and iPhone 8 say Apple Pay Cash is "coming this fall." A day prior to iOS 11 and watchOS 4's release, Apple confirmed Apple Pay improvements would come afterwards in updates to the new operating systems.