When approaching problems with sequential data, such as natural language tasks, recurrent neural networks (RNNs) typically top the choices. While the temporal nature of RNNs are a natural fit for these problems with text data, convolutional neural networks (CNNs), which are tremendously successful when applied to vision tasks, have also demonstrated efficacy in this space. 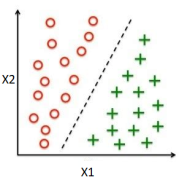 This nonlinear classification can certainly be done with complicated mathematical equations. However, a simple neural network can do this without a sweat.

How to Train Your Deep Neural Network with Dictionary Learning

Currently there are two predominant ways to train deep neural networks. The first one uses restricted Boltzmann machine (RBM) and the second one autoencoders. RBMs are stacked in layers to form deep belief network (DBN); the final representation layer is attached to the target to complete the deep neural network. Autoencoders are nested one inside the other to form stacked autoencoders; once the stcaked autoencoder is learnt the decoder portion is detached and the target attached to the deepest layer of the encoder to form the deep neural network. This work proposes a new approach to train deep neural networks using dictionary learning as the basic building block; the idea is to use the features from the shallower layer as inputs for training the next deeper layer. One can use any type of dictionary learning (unsupervised, supervised, discriminative etc.) as basic units till the pre-final layer. In the final layer one needs to use the label consistent dictionary learning formulation for classification. We compare our proposed framework with existing state-of-the-art deep learning techniques on benchmark problems; we are always within the top 10 results. In actual problems of age and gender classification, we are better than the best known techniques.

Deep learning is one of the most exciting artificial intelligence topics. It's a family of algorithms loosely based on a biological interpretation that have proven astonishing results in many areas: computer vision, natural language processing, speech recognition and more. Over the past five years, deep learning expanded to a broad range of industries. Many recent technological breakthroughs owe their existence to it. To name a few: Tesla autonomous cars, photo tagging systems at Facebook, virtual assistants such as Siri or Cortana, chatbots, object recognition cameras.

Graph representation learning is of paramount importance for a variety of graph analytical tasks, ranging from node classification to community detection. Recently, graph convolutional networks (GCNs) have been successfully applied for graph representation learning. These GCNs generate node representation by aggregating features from the neighborhoods, which follows the "neighborhood aggregation" scheme. In spite of having achieved promising performance on various tasks, existing GCN-based models have difficulty in well capturing complicated non-linearity of graph data. In this paper, we first theoretically prove that coefficients of the neighborhood interacting terms are relatively small in current models, which explains why GCNs barely outperforms linear models. Then, in order to better capture the complicated non-linearity of graph data, we present a novel GraphAIR framework which models the neighborhood interaction in addition to neighborhood aggregation. Comprehensive experiments conducted on benchmark tasks including node classification and link prediction using public datasets demonstrate the effectiveness of the proposed method over the state-of-the-art methods.