It's almost here... Apple's launch of waterproof and wireless iPhone 7 with NO headphone jack kicks off

iPhone 7 specs revealed in report ahead of Wednesday's launch

Apple is finally set to unveil its iPhone 7 at a launch event this Wednesday, but all its headline features may now have been revealed. Although Apple is notoriously secretive, almost every detail of the new device has emerged days before the company's official event, if a major leak is to be believed. The report suggests the phone will be faster, water resistant and come in two new colours. The technology giant is also rumoured to be launching its second-generation smartwatch alongside the iPhone 7. The Apple Watch 2 is said to be faster than its predecessor, with an improved battery and a built-in barometer. The timepiece is designed to work with Apple's Update WatchOS software.

Forget the iPhone 7: Experts advise users to hold off on upgrading until iPhone 8

While the iPhone 7 is expected to make its global debut at 6pm BST (1pm ET), many consumers and investors are already setting their sights on the 2017 version of the popular gadget. Some technology sites are advising users to hold off on upgrading until the next year's version, which will mark the 10-year anniversary of the iPhone. Analysts say the iPhone 8 may feature a wider display that reaches from one edge of the device to the other and a home button integrated into the screen. Apple is counting on the launch of the iPhone 7 and iPhone 7 Plus to reinvigorate its flagging smartphone sales. Despite recently announcing the sale of its billionth iPhone, the Cupertino tech giant has seen iPhone sales in decline as smartphone users wait longer to upgrade. 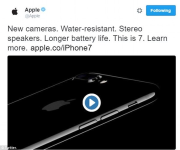