Taliban name negotiating team before new talks with US

The Taliban has named a 14-member team of negotiators, including five former Guantanamo Bay inmates and a high-profile jailed leader, for the second round of talks with the United States. With the move announced on Tuesday, the group has pushed for the release of Anas Haqqani, younger brother of the leader of the powerful Taliban faction, Haqqani network. He is currently held in a jail in Afghanistan's capital, Kabul. Taliban spokesperson Zabihullah Mujahid said Haqqani "should be released to start work on the negotiating team". He said Haqqani "was a student at the time of his arrest and was not involved in any activity for which he should be arrested".

The Taliban held a meeting on Monday with American officials in the latest attempt to bring a negotiated end to Afghanistan's 17-year war. The meeting was held in the United Arab Emirates and involved Saudi, Pakistani, and Emirati representatives, Taliban spokesperson Zabihullah Mujahid said in a statement on Twitter. A US State Department spokesperson said the meetings in Abu Dhabi are part of efforts to promote an intra-Afghan dialogue towards ending the conflict in Afghanistan. "We have long said that the war in Afghanistan will only end when Afghans sit together with mutual respect and acceptance to discuss a political roadmap for their future," the spokesperson said. "Special Representative [Zalmay] Khalilzad has in the past met, and will continue to meet with all interested parties, including the Taliban, to support a negotiated settlement to the conflict."

'Significant progress' made in US-Taliban talks in Qatar

The US peace envoy for Afghanistan has hailed "significant progress" in six days of talks with the Taliban in the Qatari capital, Doha, aimed at finding a solution to end the 17-year-old war in the South Asian country. "Meetings here were more productive than they have been in the past. We made significant progress on vital issues," Zalmay Khalilzad, the US special representative for Afghan reconciliation, wrote on Twitter. The Taliban rejected media reports about a possible "agreement on a ceasefire". "Reports by some media outlets about agreement on a ceasefire and talks with the Kabul administration are not true," Zabihullah Mujahid, the Taliban spokesman, said in a statement shared with Al Jazeera. 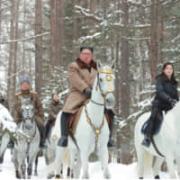 KABUL – Washington's special peace envoy, Zalmay Khalilzad, was in the Afghan capital Kabul on Wednesday to launch an "accelerated effort" to get Afghans on both sides of the protracted conflict to the negotiation table to plot a roadmap to a postwar Afghanistan. His next stop will be Doha in the Middle East, where he will restart talks with the Taliban, according to a U.S. State Department statement. The talks would be the first official round since September when President Donald Trump declared an all but done deal dead after a surge in violence killed 12 people in the capital, including a U.S. soldier. In Kabul on Wednesday, Khalilzad met with several Afghan leaders, including President Ashraf Ghani, who repeated his call for a cease-fire. Hekmat Karzai, chairman of the Kabul-based Center for Conflict and Peace Studies, tweeted photographs of his meeting Wednesday with Khalilzad in Kabul, saying they "spoke about the way forward."

Senior US Senator Lindsey Graham has urged President Donald Trump to meet Pakistani Prime Minister Imran Khan, as intense contacts between the two countries continue over negotiations to end the 17-year war with the Taliban in neighbouring Afghanistan. Graham spoke to reporters in the Pakistani capital Islamabad on Sunday, capping off days of meetings that saw the top US envoy on Afghan reconciliation and its commander of military forces in the region also visit the South Asian country. "I've seen things change here and all in a positive direction," said Graham, a senior member of the powerful Senate Armed Services Committee who has visited Pakistan dozens of times in recent years. Khan, who came to power after a general election last year, has long stated his support for a peace agreement in Afghanistan to end hostilities there. Trump would be "far more enthusiastic about the region than he is today" if he met Khan, said Graham, who held talks with the prime minister earlier on Sunday.