Turkey Leader in Poland for Talks on Security, His Policies 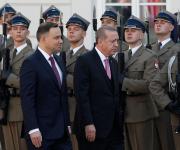 Duda's adviser, Andrzej Szczerski, said there would be no "taboo" topics and the talks would include the situation in Turkey, where tens of thousands of people have been arrested or dismissed from their jobs since last year's coup attempt.

President Recep Tayyip Erdogan on Saturday attended a ceremony in the Aegean port of Canakkale, near where troops under British command landed in 1915. While Turkey calls it the Canakkale battle, its former Allied adversaries, including Australia and New Zealand, refer to it as the Gallipoli campaign.

The Latest: Hearing of US Pastor in Turkey Commences

Brunson, 50, who has lived in Turkey for more than two decades, rejects the charges and strongly maintains his innocence. He is one of thousands caught up in a wide-scale government crackdown that followed a failed coup against the Turkish government in July 2016.

The Anadolu Agency says militants from the outlawed Kurdistan Workers' Party, also known as the PKK, attacked an army outpost Saturday in Hakkari province's Semdinli district. It said two of the soldiers are in critical condition and the Turkish military is seeking to capture the militants.

President Erdogan Ramps up Rhetoric Ahead of Turkey-EU Talks

Turkey's President and the leader of ruling Justice and Development Party Recep Tayyip Erdogan addresses his supporters at the parliament in Ankara, Turkey, Tuesday, July 25, 2017. Erdogan ramped up his anti-Western rhetoric Tuesday ahead of a meeting between his foreign minister and top European Union officials, saying the era of a submissive Turkey bowing to every Western demand is over.(Presidential