Microsoft's CEO Satya Nadella is visiting India, reflecting the growing importance of the country as a market for multinational technology companies. Nadella's visit follows the first visit to India by Apple CEO Tim Cook, who visited the country this month to drum up support for the company's plans to offer refurbished iPhones in the price-sensitive market as well as to get permission to set up its wholly-owned stores in the country. Both deals appear to have been blocked by regulators, according to reports. While Apple was largely seen as lacking focus on India until recently, when its China revenue fell 11 percent, while iPhone sales in India grew 56 percent year-on-year in the last quarter, Microsoft has been a long-time player in the Indian market. It announced in September last year the availability of Microsoft Azure services from local datacenter regions in the country, followed by Office 365 and CRM Online services.

Digital transformation involves building, testing and iterating on applications faster than your competitors -- specifically to meet the personalized, always-available, digital customer experience that people expect from the companies with whom they do business. Serverless technologies are another way to help developers focus on writing code without having to worry about infrastructure -- and companies are able to pay for actual amounts of resources consumed by applications, rather than pre-purchased capacity. Of course, serverless computing uses servers (physical and virtual), but these are meant to be completely abstracted away from the user. This means developers spend more time focused on solving business problems (e.g., faster app deployment) -- which means happier customers and more market differentiation.

Cloud computing is eating the world: Should we be worried?

Not so long ago I went to the opening of a gigantic new datacentre on the outskirts of London. It was a cold day and, despite a few heaters scattered around the hall, most of the heat was lost straight to the ceiling of the vast space, which would soon be filled with endless racks of servers.

What is DevOps ? Technology Gyan 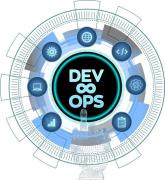 Amazon had previously offered a service of its own that was similar to Kubernetes, but the Google technology has established itself as the standard for such so-called "container" technologies and AWS ultimately had little choice but to support it, analysts said.