China has unveiled a strategy to become a "world football superpower" by 2050, with plans to get 50 million children and adults playing the game by 2020. Other targets include providing at least 20,000 football training centres and 70,000 football pitches by 2020. While China excels at the Olympics and Paralympics, it has only ever qualified for one football World Cup, in 2002. President Xi Jinping is a football enthusiast and previously said he wants China to win the World Cup in 15 years. The plan was published by the Chinese Football Association (in Chinese) on Monday.

Scientists Were Already Concerned About Kids Playing Tackle Football. It's Worse Than They Thought.

This week, Boston University researchers published a study that is sure to fire up parents worried about letting their kids play football: The earlier people played tackle football, researchers concluded, the sooner they could experience behavioral and emotional issues later in life. The study, published in the Annals of Neurology on Monday, showed that those who played tackle football before 12 years old experienced those symptoms, on average, 13 years earlier than those who played the sport after that age. In interviews with friends and family members of 246 football players who have died, researchers discovered that for every year earlier these athletes played football, they reported experiencing cognitive, mood, and behavioral issues about two half and years earlier. Of the 246 football players whose brains were donated to the BU study, 211 of them had chronic traumatic encephalopathy, known as CTE, a degenerative brain disease caused by repeated hits to the head. The study adds to the growing body of research around the connection of playing tackle football and long-term brain trauma. 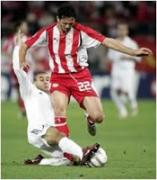 Football is also one of the most popular sports to gamble on with a myriad of bet types to choose from. The in-play market is particularly busy for bettors with prices constantly updating during the ebb and flow of the game. Because of its popularity, football attracts a lot of academic interest. Here is a citation list for academic papers concerned with football. NOTE - If any links to papers are broken then just Google the paper's title to find an alternate.

Will guest appearances by Kaka, Figo revive football in Pakistan?

Former international footballers Luis Figo and Kaka made a guest appearance in Pakistan earlier this month, launching a set of exhibition matches scheduled to take place in Karachi and Lahore in April. Football is not the most popular sport in Pakistan, a country of 220 million people that sits at 199 on the FIFA rankings. Even the national sport, hockey, is dwarfed in popularity by cricket, a fact acknowledged by Kaka at the event's launch this month. "We know football is not the most popular sport here. It's cricket, right?" said Kaka. "But I think the door is opening ... to give these youngsters another opportunity, not just for cricket but also for football."