Italian researchers recently developed the first functioning quantum neural network by running a special algorithm on an actual quantum computer. The team, lead by Francesco Tacchino of the University of Pavia in Italy, pre-published their research on ArXiv earlier this month in a research paper titled "An Artificial Neuron Implemented on an Actual Quantum Processor." Basically, they developed a single-layer artificial neural network (ANN) that runs on a quantum computer. This kind of rudimentary ANN is called a perceptron, and it's the basic building block of more robust neural networks. Previous attempts at building a perceptron on a quantum system have involved treating individual qubits as neurons in a network.

Google today announced the launch of TensorFlow Quantum, bringing together machine learning and quantum computing initiatives at the company. The framework can construct quantum datasets, prototype hybrid quantum and classic machine learning models, support quantum circuit simulators, and train discriminative and generative quantum models. Last fall, Google said it achieved quantum supremacy with the debut of a newly engineered solution. The release of TensorFlow Quantum follows the launch of Azure Quantum and progress by companies like Honeywell. Creating quantum models is made possible with standard Keras functions and by providing quantum circuit simulators and quantum computing primitives compatible with existing TensorFlow APIs, according to a Google AI blog. 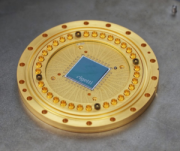 A company in California just proved that an exotic and potentially game-changing kind of computer can be used to perform a common form of machine learning. The feat raises hopes that quantum computers, which exploit the logic-defying principles of quantum physics to perform certain types of calculations at ridiculous speeds, could have a big impact on the hottest area of the tech industry: artificial intelligence. Researchers at Rigetti Computing, a company based in Berkeley, California, used one of its prototype quantum chips--a superconducting device housed within an elaborate super-chilled setup--to run what's known as a clustering algorithm. Clustering is a machine-learning technique used to organize data into similar groups. Rigetti is also making the new quantum computer, which can handle 19 quantum bits, or qubits, available through its cloud computing platform, called Forest, today.

A century ago, the quantum revolution quietly began to change our lives. A deeper understanding of the behavior of matter and light at atomic and subatomic scales sparked a new field of science that would vastly change the world's technology landscape. Today, we rely upon the science of quantum mechanics for applications ranging from the Global Positioning System to magnetic resonance imaging to the transistor. The advent of quantum computers presages yet another new chapter in this story that will enable us to not only predict and improve chemical reactions and new materials and their properties, for example, but also to provide insights into the emergence of spacetime and our universe. Remarkably, these advances may begin to be realized in a few years.