Outcomes Based Healthcare and Big Data Partnership have won an Innovate UK grant for a 1m project to change healthcare's approach to diabetes. In partnership, these two organisations will be creating "a dashboard and software product for doctors to predict and pre-treat for complications of diabetes." The press release explains that this will utilise health and non-health data in conjunction with advanced Machine Learning and analytics techniques to develop a system that can identify the progression of the disease. This will come from a local London population. The reason this Big Data and Machine Learning approach is interesting though, is it offers a top-line independent perspective on a difficult disease.

Improving healthcare is a critical application for big data analytics and artificial intelligence (AI). Think of all that available patient information--from medical records, health monitoring devices, drug trials, genetics databases--there is no dearth of data. What is often lacking is a way to aggregate that trove of information and sort through it in a way that makes it useful. If that can be accomplished, patient outcomes could be improved. Given the incentives insurance companies have to keep people healthy (i.e.

IBM's Watson is still in its early days, but the cognitive computing system could end up having a substantial impact on a number of industries, particularly healthcare and education. For example, Alder Hey Children's Hospital in England is currently using the technology to improve the patient experience, while an interactive toy called the Cognitoys Dino uses Watson to answer a child's questions in a kid-friendly and personalized way. Another space that could largely benefit from Watson's capabilities is the gaming industry. The interactive nature of games paired with Watson's natural language processing capabilities and data analysis has already led to a number of new gaming initiatives, including the first-ever Minecraft game that utilizes Watson. Called'Medical Minecraft,' the game was recently created by a group of high school students.

A Stanford School of Medicine machine-learning method for automatically analyzing images of cancerous tissues and predicting patient survival was found more accurate than doctors in breast-cancer diagnosis, but doctors still don't trust this method, say MIT researchers (credit: Science/AAAS) MIT researchers have developed a method to determine the rationale for predictions by neural networks, which loosely mimic the human brain. Neural networks, such as Google's Alpha Go program, use a process known as "deep learning" to look for patterns in training data. An ongoing problem with neural networks is that they are "black boxes." After training, a network may be very good at classifying data, but even its creators will have no idea why. With visual data, it's sometimes possible to automate experiments that determine which visual features a neural net is responding to, but text-processing systems tend to be more opaque. 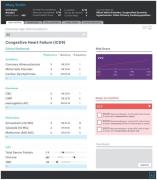 A few years after the company's launch, some fundraising and proof-of-concept pilots with insurers, Lumiata launched its Risk Matrix platform aimed at health plans and the health systems they work with to assess the future health of individuals with or at risk for chronic diseases. The product enlists artificial intelligence to help physicians make better use of the data they are inundated with and meet some of the goals of value-based care. The health IT business stated in a news release that the product is designed to offer predictions for 20 chronic conditions, such as diabetes, chronic kidney disease and congestive heart failure. The idea is to help insurers allocate resources more effectively. For providers it could mean more efficient patient triage and discharge, and better prescriptive information around symptoms, medications, risk factors and diagnoses.