Milling Machines vs. Lathe Machines - In The Loupe - Machinist Blog

Most modern manufacturing centers have both milling machines and lathe machines. Each machine follows the same machining principle, known as subtractive machining, where you begin with a block of material and then shape that material into the desired specifications. How the part is actually shaped is the key difference between the two machines. Understanding the differences in more depth will help in putting the right part in the right machine to maximize their capabilities. The major difference between a milling machine and a lathe machine is the relationship of the workpiece and the tool. 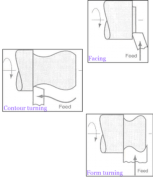 In lathe machine the work part is rotates and the tool remains stationary . Lathe machine operations involve the turning, drilling, facing, boring threading and many more. Various tools and different orientation of the tool is used to get the desired shape. All these methods are mainly basic turning operations.

For another sense of the word "woodcraft", see Woodworking. This article is about woodcraft or woodlore. For Woodcraft retail stores, catalogs and magazine, see Woodcraft Supply. Traditionally, woodcraft pertains to subsistence lifestyles, with implications of hunting-gathering. In more recent times, and in developed countries, it relates more to either outdoor recreationalism or survivalism.

You'll learn the answers to questions about lathes, such as: How is lathe speed controlled? How is the wood supported by the lathe? Is a heavier lathe better than a light weight lathe? What is a lathe banjo?

An indispensable part of the story is the record-cutting lathe and its companion electric amplification system that Bergh, 40, pieced together to re-create and better understand the way music was recorded in far-flung regions around the country. "If the first three'American Epic' films are like the story of the Apollo [first manned moon landing] mission, with unseen film footage, interviews with the astronauts and scientists, then the fourth film, 'The American Epic Sessions,' is where we rebuild the rocket and go to the moon ourselves," co-producer and co-writer McGourty said. Bergh pointed out that the cutting head on the machine -- the component that actually carved grooves into the discs, allowing music to be played back -- was technologically so good that it remained in common use until the late 1940s. During the acoustic era from the late 1800s until the mid-1920s, such lathes were connected to large horn sound collectors -- early microphones -- that required musicians to sing and play at maximum volume to create enough energy to physically move the sound horn diaphragm and the attached cutting head.