2 Charged in Connection With Death at Faked Accident Scene

The Mississippi Bureau of Investigation announced in a news release the arrests of two Jackson men -- John May and Larry Cooper -- on charges of conspiracy, hindering prosecution and accessory after the fact of murder. They await a Dec. 27 initial court appearance. The MBI hasn't provided details on the cause of Scruggs' death or said whether other arrests are expected.

Death of Wyoming Man Whose Car Caught Fire Was an Accident

Death toll in construction accident in China rises to 74

BEIJING – The death toll from the collapse of scaffolding at a construction site in eastern China rose to 74, state media said Friday, in the country's worst work-safety accident in over two years. Two others were injured after the work platform at a power plant cooling tower that was under construction collapsed Thursday, sending iron pipes, steel bars and wooden planks tumbling down on the workers, the official Xinhua news agency reported. The cooling tower was being built in the city of Fengcheng in Jiangxi province when the scaffolding tumbled down, an official with the local Work Safety Administration who would only give his surname, Yuan, said by telephone. About 500 rescue workers, including paramilitary police officers, dug through the debris with their hands, according to state broadcaster CCTV. It showed debris strewn across the floor of the cavernous, 165-meter (545-foot) -high concrete cooling tower, in the middle of which stood an unfinished structure. 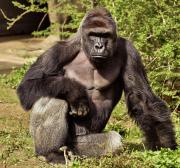 Since 1990, animals died during escapes or attacks 42 times in U.S. zoos accredited by the Association of Zoos and Aquariums, according to a database compiled by Born Free USA, a nonprofit animal advocacy group. In that same timeframe, 15 zoo incidents resulted in the loss of human life, and 110 resulted in injury, including the Cincinnati Zoo incident.