Apple has agreed to pay $24.9 million to a patent holding company to resolve a 5-year-old lawsuit accusing Siri of infringing one of its patents. Apple will pay the money to Marathon Patent Group, the parent company of Texas firm Dynamic Advances, which held an exclusive license to a 2007 patent covering natural language user interfaces for enterprise databases. Marathon reported the settlement in a filing with the U.S. Securities and Exchange Commission Tuesday. On Wednesday, in response to the settlement, Magistrate Judge David Peebles of U.S. District Court for the Northern District of New York dismissed a lawsuit against Apple filed by Dynamic Advances and Rensselaer Polytechnic Institute in Troy, New York, where the natural language technology was created. A trial had been scheduled to begin early next month in Syracuse, New York.

Researchers say evaluating the'social-connectedness' of regions using Facebook data could give epidemiologists another tool in judging the spread of infectious disease outside of geographic proximity and population density. The study, which appears in the preprint journal ArXiv and is authored by researchers from New York University, found links between two hotspots of the ongoing COVID-19 pandemic - Westchester County, New York and Lodi province in Italy - to areas with correlating connections on the social media platform, Facebook. Using an equation developed by the same researchers in 2017 called the'Social Connectedness Index' the study was able to make correlations between the spread of COVID-19 from Westchester County and Lodi to geographically disparate locations like ski resorts on Florida and vacation spots in Rimini, Italy near the Adriatic sea. Those correlations remained even after controlling for wealth, population density, and geographic proximity according to researchers. Levels of social connectedness didn't always correlate to the disproportionate spread of the virus, however. 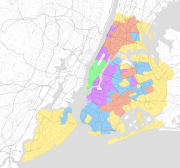 The Bronx, Brooklyn, Manhattan, Queens and Staten Island -- have existed in their present form since the consolidation of New York City in 1898. In the interim 119 years, the city has radically transformed; the individual boroughs are now inter-connected in ways that would have been unimaginable at the time of their formation. A vast network of bridges, tunnels and the largest rapid transit system in the world connect the populations, establishments, and institutions of each borough -- to say nothing of the connections enabled by the explosion of digital and mobile technologies. In this article we explore what happens when we abandon this century-old partitioning and remap the city to reflect the realities of New York City in 2017. Using data from dozens of different sources and techniques from a wide range of technologies and disciplines including computer vision, natural language processing, statistics, machine learning, network science, topology, architecture and urbanism, we constructed a new partitioning of the city that resonates with our contemporary moment -- 5 boroughs for the 21st century.