The Diet enacted a special one-time law Friday that will allow Emperor Akihito, 83, to abdicate due to his advanced age, paving the way for Crown Prince Naruhito, 57, to rise to the Imperial throne soon. The special legislation will allow Emperor Akihito to step down as the first emperor to abdicate in around 200 years. Under the current law, the Imperial succession takes place only when an emperor dies. The government will decide the timing of the abdication by issuing an ordinance. Media reports say the government may set the date as early as at the end of next year, which will also involve a change of nengo, or the era name. 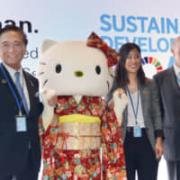 Tadamori Oshima, speaker of the House of Representatives, has said that the government should draft measures to ensure stable imperial succession as a basis for in-depth discussions by the Diet on the matter. In an interview, Oshima said he hopes the government will draw up such measures after events related to the enthronement of Emperor Naruhito conclude in April with the Rikkoshi no Rei ceremonies, where Crown Prince Akishino proclaims his elevation to first in line to the throne. Oshima emphasized that draft measures for stable imperial succession should be drawn up by the current administration of Prime Minister Shinzo Abe, whose final term of office as head of the ruling Liberal Democratic Party is set to end September 2021. Meanwhile, Oshima said that as speaker of the Lower House he is not in a position to comment on specific issues, such as whether the current rule allowing only males in the imperial family's paternal line to assume the throne should be maintained. When the draft measures are close to being adopted, the government may need to consult the Diet about how to move forward with the talks, Oshima said, adding, "I want (both ruling and opposition parties) to think about how the Diet should act" on the issue.

Bringing former members back to Imperial family should be considered to maintain male succession, says Abe

Prime Minister Shinzo Abe said Thursday that giving Imperial family status to those in collateral branches of the family should be considered to sustain male-dominated succession in the face of the dwindling size of the world's longest hereditary monarchy. Imperial succession is an "extremely important issue related to the foundation of this nation and I believe it's necessary to deal with it carefully and thoroughly," Abe told the Lower House Budget Committee. The issue is in the spotlight as there are a limited number of male heirs eligible for succession under the current Imperial House Law. Emperor Akihito, 83, hinted at his desire to abdicate in a rare video message last August, citing his advanced age and declining physical strength. A total of 11 collateral branches departed from the Imperial family in 1947.

Despite the urgent need to address the shrinking imperial family to maintain a stable line of succession, the administration of Prime Minister Shinzo Abe has been slow to tackle the issue, wary of a resurgence of arguments in favor of allowing those in the maternal bloodline to ascend to the throne. The Imperial House Law stipulates that the throne be assumed only by male imperial family members in the paternal bloodline. After the ascension of Emperor Naruhito, 59, on Wednesday, there are only three heirs to the throne. Next in line is now Crown Prince Akishino, the emperor's 53-year-old brother. He is followed by Prince Hisahito, the crown prince's 12-year-old son.

Wide-ranging Imperial reform likely too sensitive to tackle for now

An advisory panel of six intellectuals will hold its first meeting Monday to address a critical issue facing the Imperial system: Emperor Akihito's wish to abdicate sometime in a few years due to his advanced age. These discussions could drastically transform the future of the world's oldest royal system, which has a dearth of male heirs and faces concerns over the sustainability of the male-only succession line. However, Prime Minister Shinzo Abe seems to be trying to limit the scope of the panel's discussion to avoid any controversy over politically sensitive issues that could enrage conservative nationalists, his core supporters. Many nationalists have opposed allowing an emperor to abdicate because of advanced age. They argue that if an emperor is allowed to quit of his own volition, it could destabilize the Imperial system in the long run.