Lloyds Bank and Halifax customers took to social media to complain after their apps and online banking stopped working on Thursday morning. Customers of both banks said they'd been receiving error messages when attempting to log in to their accounts since about 10am. Reports of problems peaked around 10:30am and died down by lunchtime when the issue was reportedly resolved. Both Lloyds and Halifax tweeted the same message to customers on Twitter who complained about the outage: 'We know some of you are having issues with viewing your balance online. We're working to have it back to normal soon.' 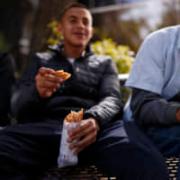 LONDON – Britain's Lloyds Banking Group suffered an outage on Wednesday that left customers of its Lloyds, Halifax and Bank of Scotland operations unable to access their accounts online. Disruption to online services is a periodic problem for Britain's banks, and last month regulators told lenders that they needed to boost their ability to resolve problems swiftly. Customers of Lloyds Banking Group said on social media that they were unable to use the bank's mobile apps or websites to access their accounts on the first day of 2020, a public holiday in Britain when bank branches are shut. "We know our customers are having issues with internet and/or mobile banking. We're sorry about this and we're working to have it back to normal soon," the group said in a statement.

Lloyds Bank was the target of a cyber-attack nearly two weeks ago which stopped a substantial number of customers using their online accounts. The breakdown in service from the group, including Halifax and Bank of Scotland, came after the websites were overwhelmed with millions of requests in a denial of service attack. It is particularly worrying for banks that the disruption lasted three days. Lloyds revealed little at the time, despite a flood of Twitter complaints. But it has emerged that the National Cyber Security Centre is working with the bank on the attack.

Lloyds Banking Group suffered an online attack lasting two days as cybercriminals attempted to block access to 20m UK accounts. The denial of service attack ran for two days from Wednesday 11 January to Friday 13 January, as Lloyds, Halifax and Bank of Scotland were bombarded with millions of fake requests, designed to grind the group's systems to a halt. Usually in a denial of service (DOS) attack, the criminals demand a large ransom, to be paid in bitcoins, to end the onslaught. However, no accounts were hacked or compromised during the attack, and Lloyds did not pay a ransom. This effectively drops a portcullis over the server launching the attacks, but also stops legitimate customer requests from that area too.

Hundreds of thousands of Lloyds, Halifax and Bank of Scotland customers were unable to make payments from their online accounts today. Some have been facing the frustration of not being able to pay and transfer money online. Others were not able to confirm whether funds were arriving in their account. A spokesperson for Lloyds Banking Group, which owns the three brands, apologised but said its systems were now back up and running. "However due to the issues experienced today there may be a delay in processing some of the payments that customers made earlier in the day. We continue to advise customers that they should not submit a second payment, to avoid duplicate payments being processed."