Georgia Secretary of State Brad Raffensperger said Friday that "there will be a recount in Georgia" after vote totals show a razor-thin margin between President Trump and Democratic nominee Joe Biden in the battleground state. Raffensperger said the state -- which has 16 electoral votes and would give Biden the boost he needs to surpass 270 and clear the path to the White House -- is "too close to call." Gabriel Sterling, the voting system implementation manager for Raffensperger, added that the small number of votes is comparable to "a margin of less than a large high school" and emphasized that candidates can only request a recount until after the election is certified and if the results are within 0.5% of each other. Officials said they expect to know the result by the end of November. As of Friday, Georgia had reported 99% of the votes have been counted and Biden overtook Trump for the lead by a mere 1,098 votes.

Taking a razor-thin edge over U.S. President Donald Trump in the vote count in Georgia, former U.S. Vice President Joe Biden has moved closer to clinching another 16 votes in the Electoral College. The latest tally from Reuters finds Biden with 253 votes in the Electoral College to Trump's 214. To win, a candidate needs 270 electoral votes. As of 4:59 a.m. EST, CBS News found Biden has a small 917 vote lead over Trump in the battleground state. On Wednesday, the former vice president trailed the president by 118,000 votes. 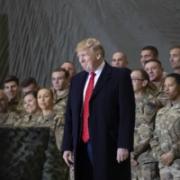 Washington – President Donald Trump has held himself up as a champion of U.S. troops without rival. Now, with his presidency on the line, he's casting suspicion on a tool of participatory democracy -- the mail-in ballot -- that has allowed U.S. military personnel to vote while serving far from home since the War of 1812. The president has shouted from Twitter to "STOP THE COUNT" and leveled unsubstantiated charges that "surprise ballot dumps" after election night are helping rival Democrat Joe Biden "steal" the election. All the while, Trump insists that military voters' mail-in ballots must be counted. He even suggested on Friday -- without presenting evidence -- that some troops' mail-in ballots have gone "missing."

If it comes down to Pennsylvania, Americans will be'waiting for weeks' for an election decision, says Ron Meyer, political analyst. Military mail-in ballots are still arriving in battleground states such as Pennsylvania, North Carolina, and Nevada, even as President Trump and his campaign protest the counting of votes after Election Day. Trump has argued that ballots received afterward should not be counted and filed lawsuits to stop the tally in states where he says observers haven't been given "meaningful access" to ensure the process is fair. WHEN WILL WE KNOW WHO WON THE ELECTION? In states where the margins between Trump and Democratic opponent Joe Biden are particularly tight, hundreds of thousands of absentee ballots still rolling in are crucial to determining the next president of the United States.

Ivanka Trump says 'every legally cast vote should be counted"

Ivanka Trump underscored the importance Friday of a "free and fair" election, and an accurate tally of ballots. "Every legally cast vote should be counted. Every illegally cast vote should not," President Trump's daughter, who's also a senior White House adviser, wrote on Twitter. "This should not be controversial. This is not a partisan statement -- free and fair elections are the foundation of our democracy."