Kremlin cracks down on VPN providers

MOSCOW – A law coming into force on Wednesday will give the Kremlin greater control over what Russians can access online ahead of a presidential election next March. Providers of virtual private networks (VPNs) -- which let internet users access sites banned in one country by making it appear that they are browsing from abroad -- will be required to block websites listed by the Russian state communications watchdog. The law is the latest in a raft of restrictions introduced by President Vladimir Putin's government and is expected to affect journalists and opposition activists, even though several VPN providers say they will not comply. Videos by the punk band Pussy Riot and the blog of opposition leader Alexei Navalny have in the past been blocked under a law that allows authorities to blacklist websites they consider extremist. "Journalists and activists who are using this to put out messages anonymously will be affected," Eva Galperin, director of cybersecurity at the U.S.-based Electronic Frontier Foundation, told AFP.

Russia's great firewall: is it meant to keep information in – or out? 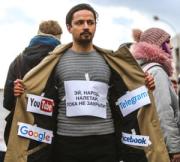 Earlier this year, US officials briefed reporters on an extraordinary operation: they claimed to have launched an offensive cyber-attack against Russia to protect the integrity of the country's midterm elections. Government hackers from US Cyber Command had pre-emptively cut off the internet to a St Petersburg office building that houses the Internet Research Agency, better known as Russia's troll factory, to prevent the spread of misinformation on election day in November 2018, US newspapers reported. News of the attack, which was never confirmed by Russian officials, did not cause much surprise in Moscow. For years, global connectivity has been portrayed as a dangerous vulnerability in the escalating conflict between Russia and the west. Days earlier, Vladimir Putin had warned that Russia could potentially be cut off from the global internet entirely.

Future Tense is a partnership of Slate, New America, and Arizona State University that examines emerging technologies, public policy, and society. On April 16, the Russian telecommunications regulator Roskomnadzor began blocking Telegram, an encrypted messaging app created by Russian entrepreneur Pavel Durov that has more than 200 million users worldwide. The app's developers had previously refused to provide the country's Federal Security Service with encryption keys that would give the government access to users' communications, and a Russian court ultimately handed down a decision to ban Telegram. Roskomnadzor has cast a very wide net in its suppression, going so far as to block IP addresses owned by Google and Amazon that are associated with Telegram services. Millions of other IP addresses for local companies and individuals that reportedly have no relation to Telegram have also been blocked.

Russia wants to cut itself off from the global internet. Here's what that really means.

In the next two weeks, Russia is planning to attempt something no other country has tried before. It's going to test whether it can disconnect from the rest of the world electronically while keeping the internet running for its citizens. This means it will have to reroute all its data internally, rather than relying on servers abroad. The test is key to a proposed "sovereign internet" law currently working its way through Russia's government. It looks likely to be eventually voted through and signed into law by President Vladimir Putin, though it has stalled in parliament for now.

Putin vs the Russian Internet - 0:1

Last week, President Vladimir Putin declared war on the Russian internet. The Kremlin had been slowly and quietly encroaching on freedom of the internet in Russia for a while now, but this time it went all out: State institutions were mobilised to block access to one of the most popular Russian messenger apps, Telegram. The creator of Telegram - 33-year-old Pavel Durov, also known as "the Russian Zuckerberg" - gained fame for setting up the Russian social network Vkontakte shortly after Facebook was launched. It became the most popular social network in Russia in just a few years. In 2014, Durov was forced to resign as a CEO of Vkontakte.