It was a normal Friday morning in the industrial city of Chelyabinsk, Russia. Adults were on their way to work, and children were in school. But that ordinary day was about to become extraordinary. Suddenly, a fireball shot across the clear morning sky leaving a thick trail of smoke, accompanied by the sound of a huge explosion. The shock wave knocked people over, shattered glass, and collapsed a factory roof. As many as 1,200 people were injured. A global network of infrasound sensors designed to pick up nuclear explosions calculated that the boom was 30 to 40 times more powerful than the atomic bomb the United States dropped on Hiroshima, Japan, during World War II.

NASA says an asteroid will have a close brush with Earth. But not until the 2100s. 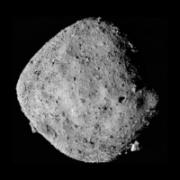 An asteroid the size of the Empire State Building has a slight chance of hitting Earth. You'll long be dead before that has any chance of happening. At a news conference Wednesday, NASA scientists said there was a 1-in-1,750 chance that an asteroid named Bennu, which is a bit wider than the Empire State Building is tall, could collide with Earth between now and 2300. That is actually slightly higher than an earlier estimate of 1 in 2,700 over a shorter period, between now and 2200. "It's not a significant change," said Davide Farnocchia, a scientist at the NASA Jet Propulsion Laboratory in California and lead author of a paper published in the journal Icarus.

Nasa plan to capture asteroid and then drag it into orbit

Why NASA plans to slam a spacecraft into an asteroid

DART, NASA's first planetary defense mission, will demonstrate asteroid deflection by crashing the spacecraft, built by the Johns Hopkins Applied Physics Laboratory (APL), into an asteroid at roughly 14,500 miles per hour. An enormous asteroid--big enough to leave a six-mile-wide crater and darken the world with dust if it hit Earth--will harmlessly zip by our planet on April 29. The object, called 1998 OR2, is at least a mile wide, and while it poses no threat, it will pass within four million miles of our planet--close enough to be classified by NASA as "potentially hazardous," because it will continue to make close passes to Earth in the future as both objects orbit the sun. "It's just a whopping big asteroid," says Amy Mainzer of the University of Arizona, one of the planet's leading scientists in asteroid detection and planetary defense. "It's smaller than the thing thought to have caused the extinction of the dinosaurs, but it is easily capable of causing a lot of damage."

Asteroid Bennu, which is about a third of a mile wide, has a 1-in-2,700 chance of hitting Earth on the afternoon of September 24, 2184, according to a NASA study. The statement, shared by the US space agency on Wednesday, stems from data collected by the OSIRIS-Rex spacecraft that is brining samples of the asteroid back to Earth. Along with rocks and dust, the craft captured precision data to better predict the near-Earth object's orbit around the sun, which shows a 1-in-1,750 chance of a future collision with the planet over the next 300 years. Even if the asteroid were to collide with our planet, it is nowhere near the size of the dino-killing, six-mile across space rock that hit the Yucatan peninsula 66 million years ago, as Bennu is less than a third of a mile wide. Nonetheless, if Bennu were to impact Earth, it would be similar to an explosion of more than 1.1 billion tons of TNT. Kelly Fast, program manager for the Near-Earth Object Observations Program at NASA Headquarters in Washington, said in a statement: 'NASA's Planetary Defense mission is to find and monitor asteroids and comets that can come near Earth and may pose a hazard to our planet.