Alphabet Inc. gets greenlight to test delivery drones at a US site 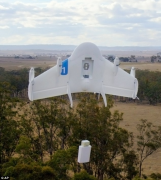 Drones could soon deliver packages right to your doorstep

Don't be surprised if you see a drone outside on your doorstep this summer. Federal regulators want to begin using drones for'limited package deliveries' as soon as within the next few months, according to the Wall Street Journal. Officials have been working with Silicon Valley tech giants and aerospace companies to develop proposals, rewrite regulations and address safety concerns, as part of an effort to make the technology a reality. A drone delivers an Amazon package to customers in Germany. The Federal Aviation Administration (FAA) made similar promises last year, but their efforts were stymied by growing concerns from local and national law-enforcement agencies.

Apple, Amazon snubbed in race to bring drones to the skies as feds approve 10 testing projects

Apple and Amazon were passed over in a program spearheaded by the Trump administration that would have given them a greater say in how the drone industry is regulated. On Wednesday, the US Transportation Department announced 10 winning drone pilot projects that will help more unmanned aerial vehicles take to the skies. Among the winners were Silicon Valley tech giants Google, Intel, Qualcomm and Microsoft. However, Transportation Secretary Elaine Chao said there are'no losers' and she thinks dozens of the applicants not chosen could be greenlighted by the FAA in the coming months. Selected winners will be able to conduct experimental drone flights that are beyond the rules outlined by the Federal Aviation Administration (FAA).