How this Baltimore company is using AI to make supplements smarter - Technical.ly Baltimore

Artificial intelligence is already gaining steam as one of the most-talked-about tech trends of 2017. It's one of those umbrella terms that's easy to throw around. But away from the big conferences and debates about tech's role in society, the hard work to develop the predictive technology is happening. One of those spots is the Eastern Campus of the Emerging Technology Centers, where Insilico Medicine is working to develop algorithms that can help select and develop the right drugs. The company sees artificial intelligence as a path to reduce the use of animal testing in developing pharmaceuticals, and is even working on a virtual human to simulate how drugs affect the body.

Insilico Medicine and Life Extension announced today an exclusive collaboration to identify novel biomarkers of human aging through the use of big-data analytics and AI, with the ultimate goal of discovery and formulation of nutrients to support health and longevity. Insilico Medicine* is a big-data analytics company specializing in applying advances in deep learning to discovery of biomarkers and drugs. Life Extension**, a Florida-based organization established in the early 1980s, is a dietary-supplement innovator dedicated to extending healthy human longevity. Insilico Medicine will focus on applying advanced signaling pathway activation analysis techniques and deep-learning algorithms to find nutraceuticals that mimic the tissue-specific transcriptional response of many known interventions and pathways associated with health and longevity. Life Extension will use this information to develop novel nutraceutical products to support health and longevity, such as "geroprotectors" -- precision natural organic small-molecule formulations that slow down or even reverse age-associated conditions and damage. 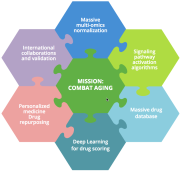 Scientists at Insilico Medicine have developed a new drug-discovery engine that they say is capable of predicting therapeutic use, toxicity, and adverse effects of thousands of molecules, and they plan to reveal it at the Re-Work Machine Intelligence Summit in Berlin, June 29–30. Drug discovery takes decades, with high failure rates. Among the reasons: irreproducible experiments with poor choice of animal models and inability to translate the results from animal models directly to humans, the wide variety of diseases, and communication difficulties between scientists, managers, venture capitalists, pharmaceutical companies and regulators. And perhaps the biggest problem: the slow-paced, bureaucratic culture in the pharmaceutical industry, the researchers note. Insilico Medicine says it aims to address these reasons by developing "multimodal deep-learned and parametric biomarkers," as well as multiple drug-scoring pipelines for drug discovery and drug repurposing, and hypothesis and lead generation.

Scientists at the Pharmaceutical Artificial Intelligence (pharma.AI) group of Insilico Medicine, Inc, have announced the publication of a seminal paper demonstrating the application of generative adversarial autoencoders (AAEs) to generating new molecular fingerprints on demand. The study was published in Oncotarget on 22nd of December, 2016. The study represents the proof of concept for applying Generative Adversarial Networks (GANs) to drug discovery. The authors significantly extended this model to generate new leads according to multiple requested characteristics and plan to launch a comprehensive GAN-based drug discovery engine producing promising therapeutic treatments to significantly accelerate pharmaceutical R&D and improve the success rates in clinical trials. Since 2010 deep learning systems demonstrated unprecedented results in image, voice and text recognition, in many cases surpassing human accuracy and enabling autonomous driving, automated creation of pleasant art and even composition of pleasant music.