The warning signs about Tom Girardi flashed year after year, allegations that he skimmed settlement money, inflated costs, abandoned clients and cheated colleagues. The vaunted Los Angeles trial lawyer, a regular on "Real Housewives of Beverly Hills," and his firm were sued more than a hundred times between the 1980s and last year, with at least half of those cases asserting misconduct in his law practice. Yet through it all, Girardi's record with the State Bar of California, the government agency that regulates attorneys, remained pristine. The bar took no action to warn the public despite receiving what The Times has learned were multiple complaints. That spotless license allowed him to continue marketing himself as one of the nation's most renowned civil lawyers, and to sign up thousands of new clients, some of whom would later say he absconded with millions of dollars of their settlement money. In the wake of the stunning collapse this winter of Girardi's law firm and reputation, The Times investigated how he was able to stay in the bar's good graces for decades while attorneys accused of similar wrongdoing were reprimanded, suspended or disbarred. The newspaper, in months of interviews and reviews of documents, found that Girardi cultivated close relationships with bar officials that at times appeared improper. Agency staffers received annual invitations to a Las Vegas legal conference, where Girardi hosted over-the-top parties at the Wynn casino featuring Jay Leno and other celebrity entertainers, according to attendees, event programs and an internal bar investigation. After the bar's executive director, a longtime Girardi pal, violated policy by using a state credit card to pay for a trip to Mongolia, the Girardi Keese law firm sent a $5,000 check to reimburse the agency, according to the internal investigation and court records. While under investigation for misconduct in 2010, Girardi bankrolled a lavish retirement bash for the chief justice of the state Supreme Court, which oversees the bar, even booking crooner Paul Anka to perform, according to news reports, court records and interviews with attendees. He forged a particularly tight relationship with a bar investigator named Tom Layton. Over the decade and a half Layton worked at the bar, Girardi routinely treated him to pricey meals at the Jonathan Club, Morton's and the Palm, according to Layton's sworn testimony. The investigator rode on Girardi's private jet and two of his children got jobs at Girardi Keese, according to the testimony and an online resume.

5G on the horizon: Here's what it is and what's coming – Ars Technica

That doesn't mean 5G won't open up interesting possibilities in areas like home broadband and machine-to-machine connectivity. But in the form of wireless mobile device connectivity we know best, 5G marketing has been writing checks that actual 5G technology will have a lot of trouble cashing. The first thing to know about 5G is that it's a family affair--and a sometimes-dysfunctional one. Millimeter-wave 5G occupies bands much higher than any used for 4G LTE today--24 gigahertz and up, far above the 2.5 GHz frequency of Sprint, hitherto the highest-frequency band in use by the major US carriers. At those frequencies, 5G can send data with fiber optic speeds and latency--1.2

Wireless, Super-Fast Internet Access Is Coming to Your Home

In the gleaming but quiet headquarters of a startup called Starry--above the din of Boston's Downtown Crossing--40 engineers are toiling to achieve a disruptive vision: delivering Internet access to apartments and businesses, cheaply and wirelessly, nearly 100 times faster than the average home connection today. The idea of gigabit-per-second wireless service to homes has been around for at least 15 years, but technology advancements make the idea far more plausible today. The high-capacity wireless technology involved--known by a chunky piece of jargon, "millimeter wave active phased array"--is now much less expensive and bulky thanks to advances in microelectronics and software. Telecom giants including Verizon and AT&T are working on the technology, as are Facebook and Google with their efforts to provide fast public Wi-Fi access. Starry's service, expected to launch this summer, would be the first to use the technology to actually get inside homes and offices.

5G could change everything. Here’s what you need to know before you buy into the tech

Verizons 5G lab is creating new and innovative ways to take advantage of the speed of 5G. With 5G, however, things are going to be a little different. To be clear, you don't need to know the details of how 5G works to enjoy the potential speed increases and other cool capabilities it will eventually offer. However, you do need to be aware of some 5G basics to really understand what future smartphones, connected devices, and carrier plans are going to offer – and how they'll differ. Learning a bit about how 5G works – and why not all 5G is the same – also helps to put some big recent business developments into context.

5G Heats Up Base Stations 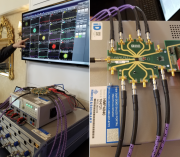 Before 5G can be deployed commercially on a large scale, engineers have to solve some stubborn problems--including how to make a hot technology a whole lot cooler. But still mostly missing from the 5G equation are base stations powerful enough to shape and direct an individual RF connection to every subscriber within range, while performing feats of electromagnetic geometry to maintain that connection. A base station in the wireless world is a device that connects other wireless devices to a central hub. It is a wireless receiver and short-range transceiver that consists of an antenna and analog-to-digital converters (ADCs) to convert the RF signals into digital and back again. The 5G base station will have beamforming massive multiple-input, multiple-output (MIMO) antennas--an array of antennas that can focus and steer multiple beams simultaneously to different targets on the ground, such as a cell phone, using the millimeter wave spectrum. Sometimes that means bouncing the signal off an object to reach near the target rather than broadcasting a signal broadly over an area.