There are three main ingredients to creating artificial intelligence: hardware (compute and memory), software (or algorithms), and data. We've heard a lot of late about deep learning algorithms that are achieving superhuman level performance in various tasks, but what if we changed the hardware? Firstly, we can optimise CPU's which are based on the von Neumann architectures that we have been using since the invention of the computer in the 1940's. These include memory improvements, more processors on a chip (a GPU of the type found in a cell phone, might have almost 200 cores), FPGA's and ASIC's. Such is the case with research being done at MIT and Stanford. 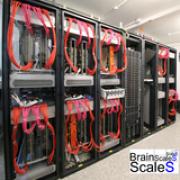 Neuromorphic computing or neuromorphic engineering has been described as the use of large integration systems containing numerous analog circuits allowing the replication of neuro-biological behaviors existing in a human's nervous system. The neuromorphic computing market platform consists of two vital systems based on the custom hardware architecture. Such systems are designed to program neural microcircuits by applying brain-like thought process in cognitive computing and machine learning process. This procedure enables a machine to learn, adapt and function like a human brain does rather than functioning like a normal computer. In addition, to perform such a complex task, the computing platform requires the state-of-the-art circuit technologies and electronic components, which allows the platform to receive new data or knowledge gained from various other sources of neuroscience research, e.g.

Neuromorphic engineering, also known as neuromorphic computing,[1][2][3] is a concept developed by Carver Mead,[4] in the late 1980s, describing the use of very-large-scale integration (VLSI) systems containing electronic analog circuits to mimic neuro-biological architectures present in the nervous system.[5] In recent times, the term neuromorphic has been used to describe analog, digital, mixed-mode analog/digital VLSI, and software systems that implement models of neural systems (for perception, motor control, or multisensory integration). The implementation of neuromorphic computing on the hardware level can be realized by oxide-based memristors,[6] spintronic memories,[7] threshold switches, and transistors.[8] A key aspect of neuromorphic engineering is understanding how the morphology of individual neurons, circuits, applications, and overall architectures creates desirable computations, affects how information is represented, influences robustness to damage, incorporates learning and development, adapts to local change (plasticity), and facilitates evolutionary change. Neuromorphic engineering is an interdisciplinary subject that takes inspiration from biology, physics, mathematics, computer science, and electronic engineering to design artificial neural systems, such as vision systems, head-eye systems, auditory processors, and autonomous robots, whose physical architecture and design principles are based on those of biological nervous systems.[9]