America's technological leadership is at stake in this election

The US presidential election next Tuesday will shape the world for years, if not decades, to come. Not only because Joe Biden and Donald Trump have radically different ideas about immigration, health care, race, the economy, climate change, and the role of the state itself, but because they represent very different visions of the US's future as a technology superpower. As a nonprofit, MIT Technology Review cannot endorse a candidate. Our main message is that whoever wins, it will not be enough for him to fix the US's abject failures in handling the pandemic and to take climate change seriously. He will also have to get the country back on a competitive footing with China, a rapidly rising tech superpower that now has the added advantage of not being crippled by covid-19. 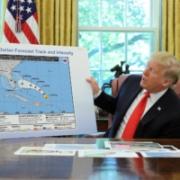 WASHINGTON – From his lab in Toulouse, France, Benjamin Sanderson models the range of extreme risks to humans from climate change, research he hopes can inform policymakers planning for worsening wildfires and floods. It is the kind of work he once performed in the United States -- and hopes to again soon. Sanderson is among dozens of U.S.-based climate scientists who shifted their research to France, or sought refuge in academia or in left-leaning states like California after Republican Donald Trump was elected in 2016. They worried his administration's distrust of science would impact their ability to finance and advance their work. Now, with the presidential election looming -- and Democrat Joe Biden ahead in the polls and promising to prioritize the role of science in policymaking -- some of these researchers hope for a return to the days when the United States was viewed as the best place on earth to do their jobs.

One Thing Biden and Trump Seem to Agree On: We Need to Focus on Innovation

On Wednesday at noon Eastern, Future Tense will host an hourlong online discussion about the relationship between the U.S. government, national security, and private industry. When in 1791 Treasury Secretary Alexander Hamilton presented his plan to Congress to develop a U.S. manufacturing sector, he kick-started a debate about the role of the federal government in industrial policy that has run consistently through the history of the republic. In recent years, though, despite the examples of industrial policy enthusiasts like Abraham Lincoln and Dwight D. Eisenhower, the prevailing political climate--driven by the Tea Party's influence on congressional Republicans--has been to largely reject the idea that government should "interfere" with the free market at all. In practice, the federal government has continued a wide range of measures that support industry, especially in the defense sector. Nevertheless, such has been the political climate that even the Obama administration's investments to promote recovery from the 2008 financial crisis (especially under the 2009 American Recovery and Reinvestment Act) became the fodder for bitter partisan controversy, with 2012 vice presidential candidate Paul Ryan declaring during the campaign that "the big problems we have today … [is] … [p]icking winners and losers in the economy through spending, through tax breaks, through regulations does not work." As a result, not only has there been a lack of public discussion, beyond a small group of academic and think tankers, about how the U.S. should run its industrial strategy, but there has been even less effort to optimize the federal government's ability to do that.

Biden, in a burst of climate orders, rejoins the Paris Agreement 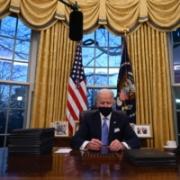 WASHINGTON – U.S. President Joe Biden on Wednesday recommitted the United States to the Paris climate agreement, the international accord designed to avert catastrophic global warming, and ordered federal agencies to start reviewing and reinstating more than 100 environmental regulations that were weakened or rolled back by former President Donald Trump. The moves represent a first step in healing one of the deepest rifts between the United States and the rest of the world after Trump defiantly rejected the Paris pact and seemed to relish his administration's push to weaken or undo major domestic climate policies. Biden has elevated tackling the climate crisis among his highest priorities. In addition to curbing global warming, he has vowed that ending the coronavirus pandemic, restoring the economy and addressing racial injustice will be the central causes of his administration. "We're going to combat climate change in a way we have not before," Biden said in the Oval Office on Wednesday evening, just before signing the executive orders.

Science is poised to get a much more prominent role in President-elect Biden's administration. Nature and Reuters report that Biden has named breakthrough geneticist Eric Lander (seen above in 2002) not only as the director of the Office of Science and Technology Policy, but will make him the first Presidential Science Advisor to have a cabinet-level role. This reflects a desire to have science "at the forefront" of the administration, according to Biden. Lander is best known as a key leader for the Human Genome Project that set out to sequence DNA. He's not a stranger to Biden -- he was the external co-chair of the President's Council of Advisors on Science and Technology during the Obama administration. The recovery from the COVID-19 pandemic is at the heart of Biden's initial strategy, and a life sciences expert could be critical to making informed decisions about the novel coronavirus and the vaccines meant to counter it.