USA TODAY Sports' Gabe Lacques breaks down how MLB is trying computer generated strike zones in the Atlantic League. An automated strike zone that converts the home-plate umpire from arbiter to mere messenger is right far more often than it is wrong. A ban on mound visits and relief specialists undeniably speeds the game's pace. And rules changes aimed to encourage balls in play and runners in motion – Thou shalt not shift defensively, but you may "steal" first base – gives hitters options beyond launching balls over a vexing alignment of fielders. Yet as its experiment with a "robotic" strike zone and other nuances enters its second month, the formal partnership between MLB and the Atlantic League illustrates the upsides and consequences of optimization.

Major League Baseball will "likely" introduce an Automated Strike Zone System starting in 2024, commissioner Rob Manfred told ESPN. The so-called robot umpires may call all balls and strikes then relay the information to a plate umpire, or be part of a replay review system that allows managers to challenge calls. "We have an automated strike zone system that works," Manfred said. The comments come in the wake of fan outrage over umpire's missed calls in recent games, including a brutal low strike error during a Detroit Tigers and Minnesota Twins tilt. Give me robo umps already," tweeted Grand Rapids ABC sports director Jamal Spencer. MLB has been experimenting with robo umps in minor league Atlantic Triple-A league since 2019. 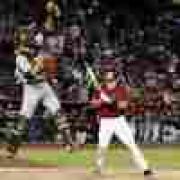 Umpires will have a little help behind home plate in some minor league games this season – from a "robot ump." Major League Baseball announced Thursday that select games in the Low-A Southeast will use a robot to help call balls and strikes. The use of the technology, called the Automatic Ball-Strike System, will also "ensure a consistent strike zone is called, and determine the optimal strike zone for the system," according to MLB. The robot's use is one of a number of experimental rules announced Thursday, which the league said are "designed to increase action on the basepaths, create more balls in play, improve the pace and length of games, and reduce player injuries." MLB has often tried out rules in the minor leagues it is considering for the majors.

Automated strike zone coming to minors but a while from MLB

Fox News Flash top headlines are here. Check out what's clicking on Foxnews.com. If a minor league player says an umpire is acting like a robot this year, he might be right. Computer umpires for balls and strikes are coming to a low-level minor league but are a while away from the big leagues. Major League Baseball plans to use Automated Ball-Strike technology (ABS) in eight of nine ballparks at the Low-A Southeast League, which starts play May 4 across Florida as minor league baseball resumes after a one-year break caused by the coronavirus pandemic.