SoftBank to be 'more cautious' with investments in China, CEO says

SoftBank Group Corp., one of the biggest foreign investors in China, plans to take a more cautious approach to backing the country's startups but will continue to cut deals, according to Chief Operating Officer Marcelo Claure. The Japanese conglomerate's stock came under pressure in recent weeks as a widening crackdown by Beijing regulators on China's technology sector battered the value of some of its biggest investments, including Alibaba Group Holding Ltd. Now the debt crisis at troubled developer China Evergrande Group is threatening broader fallout in the world's second-largest economy. "Like every other investor that's heavily invested in China, we're watching carefully to see the development of our companies there," Claure said in an interview. "By no means are we going to abandon China or anything like that. We're just going to be more cautious."

What robotics' biggest raises tell us about the industry's future – TechCrunch

I visited Boston last week and met with a number of robotics researchers, startups and established companies -- more on that later -- in the lead up to TechCrunch's fourth annual TC Sessions Robotics AI in early March. A big part of prepping for that event and my recent trip involved surveying some of the biggest funding raises from the past year. A quick survey of these trends finds most investments concentrated in a handful of key categories. From there, we can get a pretty clear view of what the robotics industry will look like in the coming years and the roles we can expect these machines to play in our daily lives. The definition of robotics is, of course, broad and only getting broader, as these technologies grow and mature.

Last year's augmented reality investments roundup was impressive. And in 2018, the dollars flowing toward AR haven't decreased, as venture capitalists and strategic investors continue to aggressively fund AR startups at a rapid pace. And while the technology still has yet to produce the mainstream breakout hits that the financial analysts and media are looking for, as one expert explained recently, revolutionary technology is a long game. "When I first got my first computer decades ago, I got it at my office. I learned how to use a computer at the office; I didn't bring it home. It was years before I got one to come home with. These headsets, these glasses, augmented reality, it's going to start more on an enterprise business-to-business kind of standpoint," said Larry Jones, CEO of Blackthorn Media (and former TV Land head) in an interview with CNBC.

Bitcoin's value is zero, but there's potential in blockchain as technology, says a recent note from Allianz Global Investors (AGI), the investment arm of insurance company Allianz. The tone of the note does not differ significantly from similar sentiments expressed by prominent investors like Charles Munger and Robert Shiller, but AGI -- a company that manages nearly 500 billion euros ($619 billion) worth of assets as of Dec. 2017 -- has expanded on the usual bubble talk a little. "What is the fair value of a bitcoin? In our view, its intrinsic value must be zero: a bitcoin is a claim on nobody -- in contrast to, for instance, sovereign bonds, equities or paper money -- and it does not generate any income stream," says the note, signed by AGI Head of Global Economics and Strategy Stefan Hofrichter. Hofrichter also argues that Bitcoin "ticks all the boxes" for essential criteria of a bubble: it's not regulated, it's ripe with fraud, and it's overtraded and overvalued, among other signals. 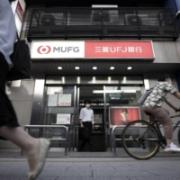 Japan's biggest bank is planning to plow about ¥1 trillion into a new investment team that will look to buy credit, equities and alternative assets in a bid to lift investment returns. Mitsubishi UFJ Financial Group Inc. expects to begin buying the assets in the second half of this year that will likely focus on U.S. securities, said the group's head, Yoshiaki Nemoto. His team will manage a new investment account, separate from the bank's conventional securities portfolio, and will aim to grow assets to about ¥1 trillion within three years, he said. "We need to consider ways to boost returns," Nemoto said in an interview, as low global interest rates endure at the same time as a hefty surplus of bank deposits. Other banks in Japan have signaled efforts to seek higher-yielding assets as lenders face a sharp buildup in excess cash amid the pandemic.