Many employers are using internships, boot camps and other after-school programs to net promising candidates before they earn their degrees, chief information officers say. "We regularly engage with students to help build brand awareness and candidate pipelines," said Ashley Pettit, CIO at State Farm Mutual Automobile Insurance Co. The Bloomington, Ill., insurer has about 6,000 technology workers, she said, and a recent online career fair it organized attracted more than 3,000 job seekers. Ms. Pettit was one of 30 information-technology executives who responded via email to CIO Journal's annual end-of-year questionnaire about hiring and other issues. CompTIA, an IT trade group, estimates that--despite ebbs and flows in the job market--the number of U.S. tech jobs is expected to grow 13.1% by 2026 from 2016, compared with 10.7% for all occupations. 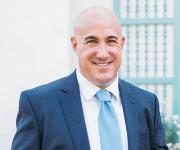 As competition for top talent in every industry heats up, an award-winning AI assistant named Olivia is stepping in to help recruiters and job candidates speed past antiquated hiring norms. The brainchild of Aaron Matos, co-founder and CEO of Paradox, Olivia is entirely mobile and relies on text messaging to compress the timespan between screening qualified people and hiring dates. "The assistant's job is to get work done, and that's what Olivia focuses on," said Matos. This frees up the recruiter's time for more valuable responsibilities, like talking face-to-face with qualified candidates." Paradox was born out of Matos' obsession with people's feelings about work. "When people love their work, they build great teams and companies can accomplish great things," he said. "I went into HR with that as my mission -- to figure out how to get people to love their work.

The results are based on an analysis of U.S. Bureau of Labor Statistics data released Friday. The bureau reported that companies in all sectors added 245,000 jobs in November, down from 610,000 the previous month. The declines in information-technology jobs follow an upswing in October that saw employers add 142,000 new workers, CompTIA said. Across the tech sector, jobs in IT services and custom-software development were hit hardest in November, declining by an estimated 7,600 positions. The only gains came in the area of data-processing, hosting and related services, which rose by 1,200.

The results are based on an analysis of last week's nationwide Labor Department data, which reported 4.8 million new jobs being added in June, lowering the unemployment rate to 11.1% from 13.3% in May. Employment data for June was collected before a surge in new coronavirus cases toward the end of the month, which may stall business reopenings and curb hiring plans, analysts said. The Morning Download delivers daily insights and news on business technology from the CIO Journal team. Growth in IT employment hit a six-month high in January, at 370,000 new jobs, but has fallen over the past four months as employers grapple with the pandemic's economic impact. There were fewer than 30,000 new IT jobs reported in May.

Companies Struggle to Keep Their Tech Workers From Logging Off

"Companies across all industries are struggling to secure this talent and in many cases new hires are simply replacing recent departures," said Craig Stephenson, managing director of the North America technology officers practice at consulting firm Korn Ferry. At the same time, demand for workers with expertise in engineering, cloud computing, data analytics and cybersecurity has never been higher, as companies retool post-pandemic operations with digital technology, Mr. Stephenson said. The Morning Download delivers daily insights and news on business technology from the CIO Journal team. Combined with a chronically low supply of tech talent, IT job seekers are eyeing an enticing seller's market, according to recruiters and analysts. Roughly a third of more than 2,800 IT professionals in a recent survey conducted by Robert Half International Inc. said they plan to look for a new job in the next few months.