"Social Media Roundup" is a weekly roundup of news pertaining to all of your favorite websites and applications used for social networking. Published on Sundays, "Social Media Roundup" will help you stay up-to-date on all the important social media news you need to know. Facebook has confirmed to TechCrunch that it is testing a "Your Time on Facebook" feature in an unreleased version of its app. The "Your Time on Facebook" feature would show users how much time they spend using the service over the last week and the average time spent for the total week. And you will be able to set time limits. 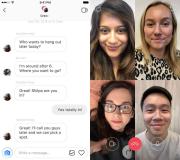 The Cinema also gives cinematographers the rare chance to adjust camera settings after the fact. You can choose the focal point, of course (possible even in the original Lytro cam), but you can also adjust depth of field, dynamic range (up to 16 stops) and shutter speed. In short, you won't have to reshoot just because you weren't quite happy with the output. The master footage also makes it comparatively easy to adapt to different frame rates and video formats, like IMAX and TV broadcasts. Don't plan on using one to produce your fan film any time soon.

Instagram has rolled out a new software update to its app that finally adds the video chat feature. The company has also implemented its newly redesigned Explore tab and has added new camera effects designed by celebrities and creators. "Now, you can video chat in Instagram Direct, either with just one person or a group. Video chat gives you the experience of realtime video in a private space and helps you feel close and connected to friends when you can't be together," Instagram said. "our friends are already on Instagram, and with video chat, you can seamlessly connect across iOS and Android and without a phone number."

Size aside, the monstrous iPhone 7 Plus' dual camera system is the most important characteristic setting it apart from its smaller sibling, the iPhone 7. Because the iPhone 7 Plus has two lenses, one standard and one telephoto, it's able to produce crisper zoomed-in shots. And there's more: The iPhone 7 Plus will soon add another feature called Portrait Mode, which Apple unveiled during its iPhone 7 launch event earlier this month. It'll come solely to the larger iPhone 7 in a software update later this year. Portrait Mode adds a depth effect that makes images in the foreground appear sharp against a slightly blurred background, as shown in the images below.