Editor's note: Prince, one of the bestselling pop artists of all time, died April 21, 2016, in his recording studio in Chanhassen, Minn., the Associated Press reported. Prince and his advisers may be toasting their new multimillion-dollar contract with Warner Bros. Records, but some executives at the record label are not exactly ecstatic. Not only were key officers at Warner Bros. surprised when Prince's publicists issued a press release Thursday announcing the pact, but they were "dismayed"--in the words of one Warner official--by the claim that it was the biggest deal in record industry history. Without denying the Prince deal is one of the "four or five biggest" in the record industry, insiders claim the total figure is based largely on projected revenue--not guaranteed income. "Can you believe what Madonna, who just finished negotiating a 60-million contract with Warners, is going to say when she hears about the Prince deal?" asked one industry observer.

Will there ever be another film like 'Purple Rain'?

It feels strange to write an item about The Kid on the day he died. But Prince was in many ways about immortality -- his music was timeless, his face never seemed to age -- so perhaps there's something apt about it too. The Kid was, of course, the character Prince played in his 1984 musical-drama film "Purple Rain." The film told a story of a brash Minnesota musician with a rough domestic life and some contentious relationships at First Avenue, the club he called his creative home. As The Kid leads a group called the Revolution, there is much intra-band and inter-club squabbling -- partly owing to the Kid not giving female musicians their due (ironic given Prince's preternaturally progressive tendency to do just that over the course of his career). 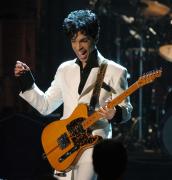 Prince, one of the best-selling pop artists of all time, died Thursday morning in his home recording studio in Chanhassen, Minn. The singer had been hospitalized in Illinois last week for what his representative said at the time was the flu, which he had been battling for weeks, leading to the cancellation of two shows on his "Piano and a Microphone" tour. He was released after three hours and returned to his home, Paisley Park, in Minnesota. Hours after he was hospitalized, Prince tweeted on April 15: "I am #transformed." His publicist, Yvette Noel-Schure, told the Associated Press that the music icon died at his home in Chanhassen.

Dozens of fans gathered in South Los Angeles on Thursday to pay homage to pop icon Prince with a musical celebration that united generations of listeners. Prince Roger Nelson was found dead at his Paisley Park compound outside of Minneapolis earlier in the day. In L.A., he was honored with a dance party fitting for a prince. Toddlers and seniors grooved to the tune of "The Purple One" and swapped stories about how his music had affected their lives. Like so many fans, Erick Johnson, 43, praised Prince for pushing the boundaries musically and stylistically.