Apple's AirPod wireless headphones have been one of the firm's most successful products - and a much anticipated new version will also monitor your health, it has been claimed. According to Digitimes, 'Apple is set to release AirPods 2 sometime in the first half of 2019'. Apple had been expected to launch an upgraded case giving the headphones wireless charging capabilities alongside its AirPower charging mat last year. However, both products failed to materialize. Analyst Ming-Chi Kuo said that Apple will release an'upgraded model with wireless charging support' in the first quarter of 2019.

We're starting to get a good picture of what Apple's second-generation AirPods might look like. A new rumor suggests the tentatively named AirPods 2 might come with a wireless charging case -- Apple promised the case along with AirPower way back at the iPhone X launch, but neither has shipped -- that might be able to quickly charge from 0 to 100 percent in about 15 minutes. SEE ALSO: 5G will be crazy fast, but it'll be worthless without unlimited data The rumor comes from leaker Max Weinbach (via 9to5Mac) who made an appearance on a recent EverythingApplePro video to talk about new AirPods features. Weinbach says "wireless charging will happen" and the 0 to 100 percent wireless charging speed is for both the AirPods and the case. The AirPods 2 wireless charging case will reportedly use Qi-based wireless charging just like the iPhone 8, X, XS, XS Max, and XR.

Apple has launched a new version of its hugely popular wireless earbuds, the AirPods, with long-anticipated wireless charging and longer battery life. The second-generation AirPods look identical to the previous version, complete with a white stalk that looks like a set of earphones with the cables cut off. But now the earbuds last longer when used for phone calls between charges and support hands-free access to Apple's Siri voice assistant. The updated AirPods contain the new H1 chip, which is designed to ensure a stable connection to the smartphone, says Apple, something that still proves difficult for many manufacturers of truly wireless earbuds. Phil Schiller, Apple's senior vice-president of worldwide marketing, said the new Airpods offered "an extra hour of talk-time, faster connections, hands-free'Hey Siri' and the convenience of a new wireless battery case".

If you're waiting for Apple to update AirPods so you can finally buy them and put cable tangles behind you once and for all, you might be holding out until later this year. According to prolific gadget leaker @OnLeaks, aka Steve Hemmerstoffer, a source told him AirPods 2 won't be released until this fall. As a stopgap, Apple will reportedly release the wireless charging case shipping with the current generation of AirPods soon. Apple first announced a version of the AirPods case capable of wireless charging way back in September 2017 alongside the iPhone 8 and iPhone X. However, the wireless charging case never shipped.

Your AirPod case could become a waterproof, wireless charging station for all the devices in your pocket 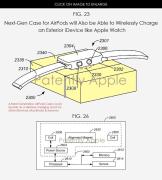 Apple's latest killer iPhone accessory, AirPods, are great earbuds and appear to be getting more popular by the day -- but they really only let you do one thing: connect to your phone for wireless audio. The AirPod case is a bit one-dimensional, too: it's sleek, and the fact that it stores some extra juice for your buds is handy, but it does little else when you're using your AirPods than take up space in your pocket. Some new patents recently granted to Apple and unearthed by Patently Apple, however, indicate that the company might be looking to make AirPods even more useful -- and it all centers on the case. SEE ALSO: Clips could be Apple's most addictive content creation app ever The working designs for this concept come from a massive cache of 250 Apple patents published in just one day. There were some standouts in the group -- most notably, one prospective design that turns the AirPod's case into a wireless charger for other Apple devices, like, perhaps the Apple Watch.