If you're near Station Square on the South Side or the National Aviary on the North Side, keep an eye out for Argo AI's self-driving cars.

In early March, Pittsburgh Mayor William Peduto signed an executive order mandating that firms testing self-driving vehicles submit materials outlining their testing methods every six months to the city's newly formed Department of Mobility and Infrastructure (DOMI). Findings from the first of these were quietly published this week, compiled in a survey ("Self-Driving Vehicle Testing in Pittsburgh Summary of Findings") to be issued once a year. According to the report, five companies -- Aptiv, Argo AI, Aurora, Carnegie Mellon University, and Uber -- are testing 55 driverless cars in 32 of Pittsburgh's neighborhoods and suburbs, with the greatest concentration in the city's Strip District and Lower Lawrenceville. The test vehicles range from modified BMW 540is and Chrysler Pacifica PHEVs to Ford Fusion Hybrids, Lincoln MKZs, Cadillac SRXs, and Volvo XC90s, all of which contain no fewer than five disengagement mechanisms including buttons in the consoles and steering wheels. Most of the cars fall under the Society of Automotive Engineers (SAE)'s level 4 designation, meaning that they're capable of performing all driving functions autonomously under certain conditions, and they drive on public roads mostly during weekdays (both during the day and at night) with occasional testing on weekends "only during favorable weather conditions."

No Driver? Bring It On. How Pittsburgh Became Uber's Testing Ground - NYTimes.com

Any day now, Uber will introduce a fleet of self-driving cars in Pittsburgh, making this former steel town the world's first city to let passengers hail autonomous vehicles. So with the world watching, what has the city of 306,000 done to prepare for Uber's unprecedented test? The answer is not much. There have been no public service announcements or demonstrations of the technology. Except for the mayor and one police official, no other top city leader has seen a self-driving Uber vehicle operate up close. 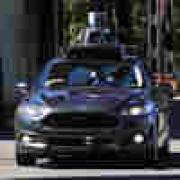 An Uber Technologies self-driving test vehicle like the one that hit a pedestrian in Arizona on Sunday night. SAN FRANCISCO -- One of the country's top self-driving car experts says that a recently released dashcam video suggests a failure of technology is at issue in the fatal Uber self-driving car incident that killed an Arizona woman. "The car's LiDAR (light ranging and detection laser system) should have picked the pedestrian up far before it hit her," says Raj Rajkumar, who leads the autonomous vehicle research team at Carnegie Mellon University. "Clearly there's a problem, because the radar also should have picked her up throughout, she was moving," he says. "Maybe it's the sensors not working correctly or the hardware that processes it, or the software."