Bill Gates, Jeff Bezos, Elon Musk Have Lost $115B This Year So Far

Bill Gates, Jeff Bezos, and Elon Musk have taken big hits over the last five months, losing as much as a $115 billion to their combined net worths. The billionaires are currently worth $123 billion, $139 billion, and $224 billion, respectively, according to the Bloomberg Billionaires Index. But Gates, Bezos, and Musk were worth much more at the start of 2022 than they are now due to the falling stock market. Gates has seen his net worth fall by $123 billion, while Bezos has suffered a $53.2 billion loss. Musk's net worth has dropped by $46.4 billion, according to the Bloomberg Billionaires Index. 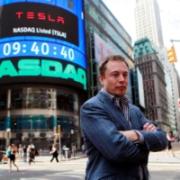 A statement that seemed outlandish one year ago became plausible, then almost inevitable as Tesla Inc.'s share price climbed higher and higher in 2020. On Thursday it finally happened. The electric-automaker's shares surged 7.9%, boosting Musk past Amazon.com Musk is worth $194.8 billion, or $9.5 billion more than Bezos, whose Blue Origin is a rival to Musk's Space Exploration Technologies Ltd., or SpaceX, in the private space race. Tesla's ascent thrusts its brash founder into a role occupied by only a handful of other people in recent decades and underscores the dramatic stock moves that have upended the global wealth rankings of late.

It's been one of the most lucrative weeks in history for some of the world's wealthiest people. Inc. founder Jeff Bezos topped the once-unfathomable amount of $200 billion. Entrepreneur, inventor, provocateur Elon Musk added the title of centibillionaire when his fortune soared past $100 billion fueled by Tesla Inc.'s ceaseless rally. And by Friday, the world's 500 wealthiest people were $209 billion richer than a week ago. Musk's surging wealth expanded the rarefied club of centibillionaires to four members.

Elon Musk follows through on Twitter promise, sells $1.1B in Tesla stock. Was he playing the market?

Did Elon Musk dupe his Twitter followers? The eccentric billionaire and Tesla CEO sold 930,000 shares of his company stock worth about $1.1 billion according to SEC filings released on Wednesday. The sale is an apparent response to the Democrats' plan for a possible billionaires' tax imposed on about 700 of the richest Americans including Musk, who also founded SpaceX, Amazon and Blue Origin founder Jeff Bezos and Facebook and Meta founder Mark Zuckerberg. Musk currently has a real-time net worth of nearly $281.6 billion, making him one of the world's richest people according to Forbes, with his wealth surpassing the $200 billion mark two months ago. Prior to the sale becoming public, Musk asked his 62.5 million followers on Twitter in an informal poll whether he should sell 10% of his stock to pay his taxes.

Some of the biggest names in tech, including Tesla CEO Elon Musk, Amazon CEO Jeff Bezos, Microsoft co-founder Bill Gates and Meta (formerly Facebook) founder Mark Zuckerberg, have lost billions since the beginning of the year with cryptocurrency and tech stocks continuing to slump. Tech billionaires are seeing a rough start to the year with the Bloomberg Billionaires Index showing the moguls have collectively lost $95 billion of their personal wealth. The sharp decrease is because their wealth is associated with the shares they own in their respective companies, which have taken a hit in recent days. The losses reduced the wealth of Tesla CEO and Time Magazine 2021 Person of the Year Elon Musk by $27 billion. Amazon CEO and founder Jeff Bezos lost almost $25 billion while the wealth of Microsoft co-founder Bill Gates dropped by $9.5 billion.