Most smart speakers have a physical button to disable the microphone, so a private conversation can't be recorded to begin with. You can hit that when you're having sensitive conversations. The button on the Echo will turn red; other devices have similar cues. It doesn't make sense to keep the mic disabled throughout the day, though. If the Echo can't hear you, it won't be able to order you more toilet paper or play smooth jazz.

Smart speaker shipments in Q3 2018 soared year-over-year, with Amazon leading the way. The battle between Amazon and Google drove smart speaker sales higher in the US and some other key markets, according to research firm Canalys. Meanwhile, Baidu, Alibaba and Xiaomi are vying to lead the huge growth in the Chinese market. Worldwide smart speaker shipments grew 137 percent year-over-year in Q3, according to Canalys, reaching 19.7 million units. Similarly, Strategy Analytics reports that 22.7 million units were sold in Q3, amounting to year-over-year growth of 197 percent. 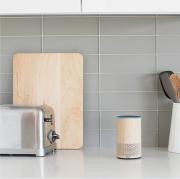 Amazon.com Inc. has triggered a race to the bottom in smart speakers.

IKEA and Sonos show off their first smart speaker prototype

Nearly six months after IKEA and Sonos announced their plans to "democratize" music together, the partnership has revealed a teaser of the forthcoming SYMFONISK speaker range. However, the above image -- which doesn't look unlike a stage projection light -- is said to be a non-functional prototype, so the final product may look nothing like this (fingers crossed). Whatever form the speakers eventually take, they'll be fully compatible with Sonos' existing range of wireless speakers, and with IKEA's Home Smart range of lights and switches. As the image shows, there's a distinct lack of Sonos branding on the device, no doubt a measure designed to set them apart from the company's usual wares, which start at $150. It's also not clear when the SYMFONISK series will be available to buy, but given IKEA's increasing interest in the sound space (it recently launched its ENEBY line) we probably won't have to wait very long to find out what's next.