Banking on the Move

Indisputably, the banking sector in Serbia is probably the most developed and competitive segment of the national economy, in terms of business aspects but also in the area of regulatory harmonization with Basel standards and European Central Bank (ECB) guidelines. It will remain one of the key generators of further development. In 2017, total balance-sheet assets of the Serbia banking sector amounted to approximately 28 billion euros, of which two-thirds is foreign-owned. The past period was marked by the consolidation of the banking sector and withdrawal of Greek banks, which resulted in a total of 29 active banks. Expectations are that the consolidation process will continue, with competition remaining at a satisfactory level, ultimately benefiting clients.

Bank of America Beefs up Security for Online Banking

Just last month, credit monitoring firm Equifax Inc disclosed that cyber criminals had breached its systems between mid-May and late-July and stolen the sensitive information of millions of Americans.

First, let me give you 2 facts. Fact 1, the most common fee scale of an investment bank on a merger deal is based on Lehman 5-4-3-2-1 formula, this means 5% is paid on the first million dollars of the sale price, 4% on the next million, 3% on the third million, 2% on the fourth million, and 1% on the amount over $4 million dollars. For large transactions, the fees are less than 1% of the deal's value, still a tremendous amount of money. The 2nd fact is that taking a company public can also be very expensive. Costs vary, but can be as much as 10% on a $150 million stock issue, not including internal expenses, such as management's time.

The future of banking talent 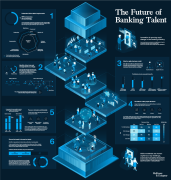 We're all aware of the rapid pace of innovation in the global banking industry--but the focus on new technologies sometimes means the human element is overlooked. However, as more processes become automated and digitized, banks will need to fundamentally shift the way they find and develop talent. Our infographic sets out the six ways banks are becoming talent-first organizations.

Digital banking offerings might not be new in countries like the U.S. and U.K., but it's still an emerging offering in some. Recent partnerships and product launches are bringing digital capabilities to financial institutions (FIs) and consumers in countries where access to financial tools was previously limited to brick-and-mortar branches. And, in regions where digital tools have long been available, new innovations are providing more intelligent financial insights than ever before. In the June edition of the Digital Banking Tracker, PYMNTS explores the latest digital developments in the banking world -- and the roadblocks standing in the way of widespread tech adoption. Digital banking capabilities are currently making their big debut in markets that had yet to tap in to the potential of mobile and online finance management solutions.