The (sort-of) regrets of Gil Garcetti: 'O.J.: Made in America's' reluctant star witness

Gil Garcetti looked tanned and relaxed, surprising given the schedule he'd been keeping. "I got in at 2:30 a.m. "I would have taken a different flight, but I had to give a lecture in L.A." Several hours after he arrived, Garcetti had gone straight to ABC's "Good Morning America," the start of a 40-hour media sprint that would also include "World News Tonight," "Today," "Inside Edition," the New York Daily News, phone interviews back home with the likes of KNX radio and KTLA TV, plus a host of ESPN radio hits. It was all to promote his appearance in "O.J.: Made in America," Ezra Edelman's five-part docuseries revisiting the fallen football star that airs on the sports network this week. The media blitz marks a shift for Garcetti, long the mystery man at the center of the O.J. Simpson case.

If Mayor Garcetti runs for president, L.A. should ask: What has he done for us? 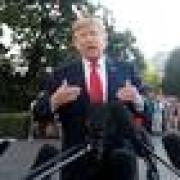 To the editor: I'd like Mayor Eric Garcetti to help me understand what he has accomplished as mayor of Los Angeles that would make anyone want to support his presidential or any other political ambitions.

While I certainly appreciate the work that police and firefighters do on our behalf, the DROP program seems to have been poorly conceived, at least for its stated purpose. I don't recall seeing a total bill for it over the last years, let alone a benefit assessment, but imagine if that money, precious public dollars, had been applied to the problem of homelessness in L.A.

What good can Mayor Garcetti possibly do by protesting at the border?

But what purpose does Los Angeles Mayor Eric Garcetti serve by traveling to Texas to show support for the children's cause? Could he be pandering to the Latino vote for his possible future run for California governor or even president? The mayor should stay home and work on our problems of traffic, crime, homelessness, the Department of Water and Power, crumbling infrastructure and more.