The global business value derived from Artificial Intelligence (AI) is projected to reach over $3,9 trillion by 2022, according to industry analyst firm Gartner. The firm expects that in the next few years, Artificial Intelligence used to support data science and other algorithm-based applications is going to become the most common use for AI, comprising about 44 percent of the total. To face industry projections, the population needs to prepare by promoting education in AI. Mohamed Bin Zayed University of Artificial Intelligence (MBZUAI) is the world's first graduate-level AI university. Named after His Highness Sheikh Mohamed bin Zayed Al Nahyan, Crown Prince of Abu Dhabi and Deputy Supreme Commander of the United Arab Emirates (UAE) Armed Forces, the AI university will introduce a new model of academia and research to the field of Artificial Intelligence.

Abu Dhabi announced the establishment of the Mohamed bin Zayed University of Artificial Intelligence, which will enable graduate students, businesses, and governments to advance the artificial intelligence field. The University will introduce a new model of academia and research to the field of AI, providing students and faculty access to some of the world's most advanced AI systems to unleash its potential for economic and societal development. Dr. Sultan Ahmed Al Jaber, Minister of State, who has been appointed Chair of the MBZUAI Board of Trustees and is spearheading the establishment of the University, said, "Mohamed bin Zayed University of Artificial Intelligence aligns with the vision of the UAE leadership that is based on sustainable development, progress and the overall well-being of humanity. Experts from around the world have been selected for the University's Board of Trustees, WAM reported. They include MBZUAI Interim President, Professor Sir Michael Brady, professor of Oncological Imaging at the University of Oxford, UK; Professor Anil K. Jain, a University Distinguished Professor at Michigan State University, USA; Professor Andrew Chi-Chih Yao, Dean of the Institute for Interdisciplinary Information Sciences at Tsinghua University, Beijing, China; Dr. Kai-Fu Lee, a technology executive and venture capitalist based in Beijing, China; Professor Daniela Rus, Director of Massachusetts Institute of Technology Computer Science and Artificial Intelligence Laboratory, USA, and Peng Xiao, CEO of Group 42. The Board of Trustees will be supported by an Advisory Board, chaired by Omar bin Sultan Al Olama, Minister of State for Artificial Intelligence, and will include Sarah bint Yousif Al Amiri, Minister of State for Advanced Sciences; Dr. Ahmad bin Abdullah Humaid Belhoul Al Falasi, Minister of State for Higher Education and Advanced Skills; Jassim Al Zaabi, Chairman of the Department of Finance, and Dr. Wan Li Min, Chief Machine Intelligence Scientist at Alibaba. Over the next decade, AI is set to have a transformational impact on the global economy, with experts estimating that, by 2030, AI could contribute nearly US$16 trillion to the global economy. Al Jaber added, "The invention of electricity, the railroad, smartphones all transformed the world as we knew it.

Philz Coffee has thrived in San Francisco for four decades by convincing customers to slow down and enjoy a cup of customized brew. From its first store in the Mission District here, the company has built a broad following throughout the Bay Area despite service wait times that would get a Starbucks manager fired. "We're trying to change the way people think about coffee," says CEO Jacob Jaber, son of founder Phil Jaber. Yet this purveyor of slow coffee has of late been expanding quickly, almost like a tech startup. Philz had just a handful of stores for years.

How I Made It: Dogged determination took Jacob Jaber from top video gamer to Philz Coffee CEO 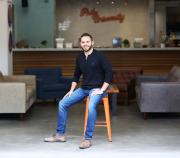 The gig: Jacob Jaber, 29, is chief executive of Philz Coffee. Jaber took over the coffee business from his father -- the "Phil" in Philz Coffee -- in 2005, and expanded its footprint from the original coffee shop in San Francisco's Mission District to more than 30 locations across California and in Washington, D.C. The chain has become a tech world fixture, with locations popping up in the heart of Silicon Valley and even on Facebook's campus. It has attracted venture capital too, most recently raising 45 million from the same firms that have fund tech start-ups. With five shops already in Los Angeles, Jaber is now preparing to launch a sixth in L.A's Arts District.