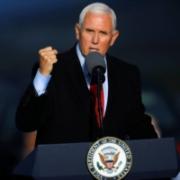 Washington – U.S. President Donald Trump's re-election campaign was buffeted Sunday by another COVID-19 outbreak in his team, surging infections across the United States and an uncomfortable admission by his chief of staff. Nine days before the vote -- and with total U.S. coronavirus deaths nearing the grim total of 225,000 -- Trump's chief of staff Mark Meadows conceded that "we are not going to control the pandemic." Instead, he said, "We are going to control the fact that we get vaccines, therapeutics and other mitigation areas." But Democrat challenger Joe Biden's campaign immediately seized on Meadows' comments to hammer the administration over the virus, which has set records for new cases in recent days. "They are admitting defeat," Biden's running mate Kamala Harris said during a campaign stop in Michigan, "and I've been saying that, and Joe Biden has been saying that since the beginning."

Mayor Pete Buttigieg was wrong about 2020 Democratic presidential hopeful Joe Biden's economic agenda being better for Americans, said Trump 2020 Communications Director Tim Murtaugh on Sunday, two days away from Election Day. "They have no idea what they are talking about when they are talking about the Biden economy," Murtaugh told "Outnumbered Overtime." Murtaugh said that the Biden economy was "stagnant." When President Trump took over the economy skyrocketed," Murtaugh said. "Wage growth for the bottom half of wage earners grows faster than those at the top of the scale and the president, we just saw it the other day--record GDP growth. Murtaugh pushed back on Buttigieg's comments that President Trump "is good at taking credit for what others have done in the economy."

Trump campaign mocks Biden event in Ohio, says he was 'visiting a state he cannot win'

Democratic presidential nominee Joe Biden weighs in on the confirmation process for Judge Amy Coney Barrett. President Trump's campaign took a jab at Democratic nominee Joe Biden after the former vice president made a campaign stop in the key battleground state of Ohio on Monday, saying that Biden was "visiting a state he cannot win." "President Trump won Ohio convincingly in 2016 and will do so again in November, so we are thrilled to see Joe Biden wasting a valuable day on the campaign trail visiting a state he cannot win," Trump communications director Tim Murtaugh said in a statement. "President Trump has a clear record of building a strong Ohio economy before the global pandemic was unleashed by China, and he's already doing it a second time." Biden spoke to members of the United Auto Workers in Toledo during his campaign stop. The former vice president hammered Trump on his response to the coronavirus pandemic and argued that the president is more concerned with the stock market's performance than with the financial welfare of middle-class families.

With less than 80 days to go before the US presidential election, it looks like Joe Biden's race to lose. Yet, as Democrats nationwide gather online this week to nominate him as their party's choice to challenge President Donald Trump on November 3, many fear Biden may just do that - for factors almost entirely out of his control. The former vice president and his allies have every reason to feel bullish. Polls show Biden has built an expansive lead in nearly every battleground state that Trump won narrowly in 2016, as the Republican's approval numbers tumble amid the coronavirus pandemic. For the first time in 10 years, retaking the Senate - and full control of Congress - is within sight.