The 22 Best Endpoint Security Companies for 2020

Solutions Review's listing of the top Endpoint Security vendors is an annual mashup of products that best represent current market conditions, according to the crowd. Our editors selected the top Endpoint Security products based on each solution's Authority Score, a meta-analysis of real user sentiment through the web's most trusted business software review sites and our own proprietary five-point inclusion criteria. Who are the 22 Best Endpoint Security Companies for 2020? Despite the flood of information on endpoint security capabilities and features, the core of endpoint security remains the same. Namely, these solutions help businesses prevent malware from penetrating their networks and discover dwelling threats. Next-generation endpoint security goes beyond antivirus--it fortifies new components of the decentralized digital perimeter.

Cybersecurity has been continuously evolving, not just as a hot topic for discussion but as the mainstream challenge and priority for a large number of organizations. Recently, we have seen several cyberattack incidents turning into global epidemic events, such as WannaCry (May 2017; damaging 200,000 computers across 150 countries), Petya/NotPetya (June 2017; $10 billion damage estimated), Mirai (Oct 2016; initial level impact on 300,000 insecure IoT-devices worth $100 million, further variants and consequences still getting unveiled). And even on the corporate front, the world has witnessed several massive breach incidents, including Yahoo (2013-14; impacting 3 billion users), Equifax (July 2017; impacting 150 million U.S. citizens), and Aadhaar (Aug 2017 to Jan 2018, 1.1 billion Indian citizens impacted), just to name a few. With every passing day, cybercriminals are learning and adopting new and innovative methods of attack. To withstand such attacks, security agencies also need to ramp up their game. 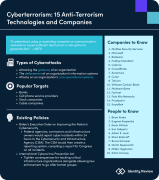 NATO defines cyberterrorism as "a cyberattack using or exploiting computer or communication networks to cause sufficient destruction or disruption to generate fear or intimidate a society into an ideological goal." The simplest form of cyberterrorism entails attacks that deny service and disrupt daily life for users of cyberspace. Within the realm of cyberterrorism, however, there are three technical levels of attacks: an attack on the gateway of an organization (through internet sites or denial of service), the defacement of an organization's information systems and most severely, attacks on an organization's core operational systems. Common targets for cyberterrorism attacks include banks, cell phone service providers, stock companies and cable companies. Experts suggest government and private sector cooperation is the first step in creating a unified front against cyberwarfare.

By the year 2021, cybercrime losses will cost upwards of $6 trillion annually. It's no surprise, then, that the cybersecurity industry is exploding as it grows to protect the networks and systems on which companies and organizations operate and store data. Because effective information security requires smarter detection, many cybersecurity companies are upping their game by using artificial intelligence to achieve that goal. A new wave of AI-powered solutions and products keep bad actors on their toes while giving IT teams much needed relief. Here are 30 companies merging artificial intelligence and cybersecurity to make the virtual world safer.