SANAA – An airstrike killed eight women and a child at a funeral reception near the Yemeni capital, witnesses said Thursday, adding to the conflict's mounting civilian death toll. At least 10 other women were wounded in the overnight raid on the district of Arhab, 40 km (25 miles) north of Sanaa, medics sent to the site told AFP. The United Nations gave the toll as at least six women and one girl killed, with Ismail Ould Cheikh Ahmed, the U.N.'s special envoy to Yemen, branding such attacks on civilians as "unjustifiable. The Iran-backed Houthi Shiite rebels, who seized large parts of the country including the capital in 2014, accused the Saudi-backed Arab coalition supporting the Yemeni government of carrying out the strike. A coalition statement sent to AFP said the group was "investigating the reports" that civilians were killed in the raid near Sanaa.

Is Saudi Arabia Safe For Tourists? US Issues Travel Warning

The U.S. State Department warned Americans Wednesday to think twice about traveling to Saudi Arabia due to the risk of terrorism. The State Department noted fighting in Yemen has spilled over into Saudi Arabia. "Terrorist groups, including ISIS [the Islamic State group] and its affiliates, have targeted both Saudi and Western government interests, mosques and significant religious sites [both Sunni and Shiite], and places frequented by U.S. citizens and other Westerners," the warning said. Saudi Arabia acknowledged 34 terrorist attacks last year, some of them deadly, including a bombing near the American Consulate in Jeddah, while announcing it had thwarted a dozen more. Earlier this year nearly 18 people with suspected terrorist links were arrested, as well as 16 others in a raid where two suspects exploded their suicide vests prematurely. 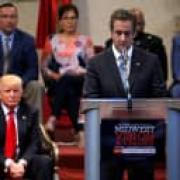 UNITED NATIONS - Fuel is being shipped illegally from Iran to Houthi Shiite rebels in Yemen to finance their war against the government, and both sides are violating international law with their military campaigns and arbitrary detention of rivals, U.N. experts said in a new report. The experts painted a grim picture of a "deeply fractured" country sliding toward "humanitarian and economic catastrophe" with no sign of victory by either side in a conflict that many view as a proxy war between regional rivals Saudi Arabia and Iran. In the 85-page report to the Security Council seen Friday by The Associated Press, the experts said the government and its coalition partners led by Saudi Arabia made "significant progress" on the ground against the Houthis in 2018 -- but their aim of restoring the government's authority throughout the country "is far from being realized." At the same time, the panel of experts monitoring U.N. sanctions against Yemen said "the Houthi leadership has continued to consolidate its hold over government and non-government institutions." In the report's only upbeat note, the experts said talks in Sweden between the government and the Houthis that led to an agreement in December on a cease-fire and withdrawal of rival forces from the key port of Hodeida "have raised hopes that a political process may quell the primary conflict in Yemen." 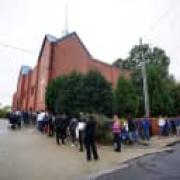 CAIRO – Yemen's rebels claim they halted advances of their adversaries, the U.S.-backed, Saudi-led Arab coalition, at a key battlefield around a strategic Red Sea port city. Fighting continued around Hodeida on Tuesday despite the statement from the Shiite rebels, also known as Houthis, that a three-pronged coalition assault had been stopped around the city's outskirts. The Iran-backed Houthis said they lost at least 30 men and a dozen armored vehicles. Dozens of fighters have been killed and hundreds wounded from both sides since a renewed coalition offensive on the city began five days ago, following calls by the Trump administration for a cease-fire by late November. The fighting has left dead bodies lying on the ground and inside burnt-out vehicles at the city's edge, according to witnesses who spoke on condition of anonymity, fearing for their safety.

The 12 workers were taken hostage from the aid group's offices in rebel-held Hali district late last week, Local Affairs Minister Abdul Raqib Fattah said in a statement carried by the pro-government sabanew.net The Yemeni aid workers were seized over accusations they accepted and distributed relief from a Saudi-led coalition that has battled the Houthi rebels since March 2015, sources told AFP news agency. Yemen's conflict pits a Saudi-led Arab coalition supportive of President Abd-Rabbu Mansour Hadi against Iran-backed Houthis who currently control the Red Sea port of Hodeida, along with the capital Sanaa and large parts of northern Yemen. Monday's news comes amid a push by forces loyal to Hadi, who is backed by the Arab coalition, to close in on Hodeida on Yemen's western coast. Forces loyal to the government took full control of Mokha, south of Hodeida, earlier in February as part of a major offensive to oust the Houthis and their allies from Yemen's southwestern coast.