A random forest is a popular tool for estimating probabilities in machine learning classification tasks. However, the means by which this is accomplished is unprincipled: one simply counts the fraction of trees in a forest that vote for a certain class. In this paper, we forge a connection between random forests and kernel regression. This places random forest probability estimation on more sound statistical footing. As part of our investigation, we develop a model for the proximity kernel and relate it to the geometry and sparsity of the estimation problem. We also provide intuition and recommendations for tuning a random forest to improve its probability estimates. 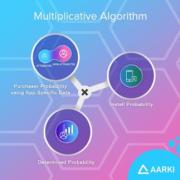 Events which are further down the funnel are generally more valuable, more rare, and harder to predict. However, learning this distribution is complicated by the sparsity of the dataset.

Simple diffusion processes on networks have been used to model, analyze and predict diverse phenomena such as spread of diseases, information and memes. More often than not, the underlying network data is noisy and sampled. This prompts the following natural question: how sensitive are the diffusion dynamics and subsequent conclusions to uncertainty in the network structure? In this paper, we consider two popular diffusion models: Independent cascades (IC) model and Linear threshold (LT) model. We study how the expected number of vertices that are influenced/infected, given some initial conditions, are affected by network perturbation. By rigorous analysis under the assumption of a reasonable perturbation model we establish the following main results.

Estimating a large alphabet probability distribution from a limited number of samples is a fundamental problem in machine learning and statistics. A variety of estimation schemes have been proposed over the years, mostly inspired by the early work of Laplace and the seminal contribution of Good and Turing. One of the basic assumptions shared by most commonly-used estimators is the unique correspondence between the symbol's sample frequency and its estimated probability. In this work we tackle this paradigmatic assumption; we claim that symbols with "similar" frequencies shall be assigned the same estimated probability value. This way we regulate the number of parameters and improve generalization. In this preliminary report we show that by applying an ensemble of such regulated estimators, we introduce a dramatic enhancement in the estimation accuracy (typically up to 50%), compared to currently known methods. An implementation of our suggested method is publicly available at the first author's web-page.