It's Not Just Robots: Skilled Jobs Are Going to "Meatware" -- Backchannel 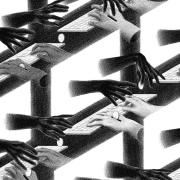 Harry K. sits at his desk in Vancouver, Canada, scanning sepia-tinted swirls, loops and blobs on his computer screen. Every second or so, he jabs at his mouse and adds a fluorescent dot to the image. After a minute, a new image pops up in front of him. Harry is tagging images of cells removed from breast cancers. It's a painstaking job but not a difficult one, he says: "It's like playing Etch A Sketch or a video game where you color in certain dots." Harry found the gig on Crowdflower, a crowdworking platform. Usually that cell-tagging task would be the job of pathologists, who typically start their careers with annual salaries of around 200,000 -- an hourly wage of about 80. Harry, on the other hand, earns just four cents for annotating a batch of five images, which takes him between two to eight minutes. His hourly wage is about 60 cents. Granted, Harry can't perform most of the tasks in a pathologist's repertoire.

Reports of the AAAI 2014 Conference Workshops

Playing violent'shooter' video games can damage the brain and may even increase the risk of Alzheimer's disease, brain scans suggest. Researchers at the University of Montreal got around 100 people to play a range of popular'shooter' games such as Call Of Duty, Killzone and Borderlands 2 for a total of 90 hours. They also gave them copes of non-violent games from the Super Mario series. By the end of the study, they found that people who habitually played action games had fewer neurons in their hippocampus, a key memory center in the brain. However, those who played non-violent games ended the study with more essential gray matter in their brains.

This Canadian Startup Can Track Your Emotions Through a Fitness Monitor

Jean-Philip Poulin was feeling "joyful" and "excited" when I interviewed him recently in Montreal. I know this because he showed me his real-time emotion metrics during our conversation, which were being parsed by a machine-learning algorithm that uses heart-rate data transmitted from his Microsoft Band 2 fitness tracker. Poulin is the COO of Sensaura, a Montreal-based software startup that proposes to bridge the gap between consumer wearables and affective computing. If its founders are as successful as they believe they will be, their product will hasten the inevitable future of emotionally intelligent machines: video games will know when you're bored, advertisers will know when you're swayed, and mental health professionals will know when you need a check-in. So far, progress in affective computing has depended on facial recognition software, which reads people's emotions pretty much the same way that people do: by looking at their faces for cues.

When terminal cancer patient Chris Taylor tweeted that he was scared he would not live to see the latest release of his favourite video game, the social media world responded with gusto. His tweet triggered a campaign that saw thousands of well-wishers help him realise his dream of playing Nintendo's Smash Bros. Ultimate, months before its release. The 21-year-old, from Ontario, in Canada, has bone cancer which has left him bedridden and unable to move more than a few feet. He said: "December is a long way away for someone who is already bedridden. "I know it's childish to despair over a video game but Smash means a lot to me and when Ultimate looks so good it breaks my heart."