On 'Jeopardy!' Watson Win Is All but Trivial

Facing certain defeat at the hands of a room-size I.B.M. computer on Wednesday evening, Ken Jennings, famous for winning 74 games in a row on the TV quiz show, acknowledged the obvious. "I, for one, welcome our new computer overlords," he wrote on his video screen, borrowing a line from a "Simpsons" episode. From now on, if the answer is "the computer champion on "Jeopardy!," the question will be, "What is Watson?" For I.B.M., the showdown was not merely a well-publicized stunt and a $1 million prize, but proof that the company has taken a big step toward a world in which intelligent machines will understand and respond to humans, and perhaps inevitably, replace some of them. Watson, specifically, is a "question answering machine" of a type that artificial intelligence researchers have struggled with for decades -- a computer akin to the one on "Star Trek" that can understand questions posed in natural language and answer them.

Over a three-day period in February, millions of people watched as the supercomputer steadily triumphed over Jennings and Rutter, beating the men at complicated clues like "A recent best seller by Muriel Barbery is called this'of the Hedgehog'?" You don't have this sleep disorder that can make sufferers nod off while standing up" (response: "What is narcolepsy?"). Watson also made some funny mistakes, like when it responded "What Is Toronto?????" to a clue about the names of a city's airports, while his human opponents correctly met the prompt with "What is Chicago?" In the end, Watson racked up $77,147 to Jennings's and Rutter's respective $24,000 and $21,600; IBM was awarded $1 million to give to charity; Jennings jokingly welcomed "our new computer overlords"; and Jeopardy!got a ratings spike. At the time, IBM was estimated to have spent somewhere between $900 million and $1.8 billion developing Watson's artificial-intelligence technology and, as far as the public could see, all the company had to show for it was an elaborate parlor trick.

Jeopardy to Pit Man Against IBM A.I. for $1 Million

Of the three contestants on an upcoming series of Jeopardy episodes, only two will be actual human beings. Jeopardy has announced that it'll be pitting two of its best contestants ever against one that isn't even human in an upcoming series of three episodes. IBM's Watson, an artificial intelligence program, will go up against the best trivia-answering humans that the world has to offer for a prize of $1 million. The competition has been in the works for four years simply because of its nature. Jeopardy's contestants often answer questions posed in an abnormal manner, with puns and wordplay, so creating a computer that can analyze these questions in the same way and formulate an answer within seconds was a seemingly impossible task.

IBM Watson: The inside story of how the Jeopardy-winning supercomputer was born, and what it wants to do next - TechRepublic

IBM Watson wowed the tech industry and a corner of U.S. pop culture with its 2011 win against two of Jeopardy's greatest champions. Here's how IBM pulled it off and a look at what Watson's real career is going to be. Between them, they'd racked up over $5 million in winnings on the television quiz show Jeopardy. They were the best players the show had produced over its decades-long lifetime: Ken Jennings had the longest unbeaten run at 74 winning appearances, while Brad Rutter had earned the biggest prize pot with a total of $3.25 million. Rutter and Jennings were Jeopardy-winning machines. And in early 2011, they agreed to an exhibition match against an opponent who'd never even stood behind a Jeopardy podium before. But this Jeopardy unknown had spent years preparing to take on the two giants in the $1m match, playing 100 games against past winners in an effort to improve his chances of winning. That opponent didn't smile, offered all his answers in the same emotionless tone, and wouldn't sit in the same room as his fellow contestants. 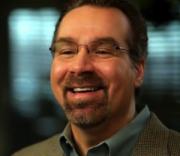 David Ferrucci's official title is "IBM Fellow and Leader of the Semantic Analysis and Integration Department at IBM's T.J. Watson Research Center." But to the world, he's the genius behind Watson, the question-answering supercomputer system that bested two humans in a nationally televised broadcast of the popular game show Jeopardy! On Monday, Ferrucci delivered a fantastic keynote at the ACM's 2011 Federated Computing Research Conference in San Jose, CA. Ferrucci walked the audience -- nearly 2,000 computer scientists from around the country -- through the creation of Watson, from its initial conception in 2004 to its nationally televised victory this past February. "The story goes," he began, "that an IBM vice president was dining at a restaurant" when, suddenly, everyone around him got up and rushed toward a TV.