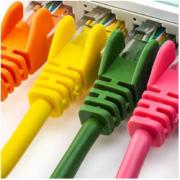 The Internet Is Still at the Beginning of Its Beginning

Can you imagine how awesome it would have been to be an ambitious entrepreneur back in 1985 at the dawn of the internet? At that time, almost any dot-com name you desired was available. All you had to do was simply ask for the one you wanted. One-word domains, common names -- they were all available. It didn't even cost anything to claim.

Internet Of Things (IoT): 5 Essential Ways Every Company Should Use It

The Internet of Things (IoT) means everyday objects are now creating data and connecting to the internet. The result is more data - a lot more data. Data we can use in ways we could not have imagined even 10 years ago. Watches now monitor our sleep and keep track of our activities, TVs understand what we say, golf clubs tell us how to improve our swing, and cars, planes or ships make autonomous journeys. Today, we have about 15 billion IoT devices.

What Everyone Should Know About The Internet Of Things

While most people have heard of the Internet of Things (IoT) -- a network of everyday objects with internet connectivity -- there's a lot of misinformation or lack of information surrounding this growing industry. In order to help consumers understand, seven technology leaders from Forbes Technology Council explain what people should know about the IoT that they might not be aware of yet. "The Cloud" is simply the internet. And data is always data. The IoT of things is nothing more than a new set of devices sending data to the internet, just like personal computers and mobile phones did before.