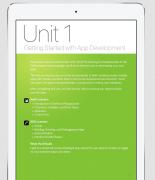 Everyone I know has a mobile app idea. I even have a few, but little idea of how to build an iPhone app. Last year, I tried learning code with Apple's Swift Playgrounds iPad app. It schooled me in the basics of Swift, the new programming language Apple unveiled three years ago, while entertaining me with an adorable on-screen code buddy. I liked it, but also had trouble seeing the path from my training (which, to be fair, I never completed) to building a Swift-based mobile iOS app.

Apple's free coding curriculum, which launched for high schools and community colleges in May, has been growing in popularity over the last few months. It had six community college systems on board at launch and in August, the company announced that over 30 had worked the curriculum into their course offerings for the 2017-2018 school year. Now, Apple has gone global with its coding instruction and over 20 colleges and universities outside of the US have now adopted the App Development with Swift Curriculum. Universities in Denmark, the Netherlands, New Zealand and the UK are among those that have signed on. RMIT University, Australia's largest higher education institution, has adopted the year-long course as well, which it will be offering online, and its students will also be able to enroll in a new on-campus vocational course.

Apple's 'Everyone Can Code' initiative is going global

Apple wants to teach people all around the world to code, so the company is making the move to colleges worldwide. In a Tuesday announcement Apple announced it's introducing its Everyone Can Code initiative -- which works to teach coding and app-building skills with the help of its programming language called Swift -- to over 20 colleges and universities outside of the United States. According to Apple, the schools involved in the global expansion, such as Australia's RMIT University, will offer Apple's App Development with Swift Curriculum. The full-year engineer-designed course is expected to pass along fundamental coding skills to students and turn first-time coders into potential pros. RMIT will also offer scholarships for teachers with coding aspirations, along with a free summer school course for those interested in studying the basics.

Apple CEO Tim Cook (L) shows dancer Maddie Ziegler (R) a new iPhone during a product demonstration at Bill Graham Civic Auditorium in San Francisco, California on September 07, 2016. Apple is creating a new curriculum designed to teach mobile app development to high school and college students with little to no prior coding experience. The tech giant on Wednesday will begin making the curriculum available for no charge in its iBooks store, CEO Tim Cook told USA TODAY in an interview. Already, he said, six community college systems have committed to teaching the material to an estimated half-million students this fall. "We think it's huge," Cook said, "and we're so proud to help students learn and thrive in the new economy."

Tim Cook, the CEO of Apple, speaks during the Fortune 500 Global Forum in Guangzhou, Guandong Province, China, on Dec. 6. The Apple executive tells USA TODAY that the company will partner with the Chicago public school system in 2018 to teach coding to every student in the district.