Almost half of new international flights at Haneda to connect Japan and the U.S. 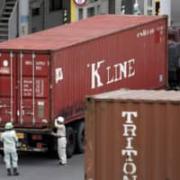 Japan's transport ministry said Wednesday it will allocate 24 of 50 daily spots to be added for international flights at Haneda Airport in March 2020 to services connecting Japan and the United States. The 24 spots will be distributed evenly to Japanese and U.S. airlines. The daily number of flights from Tokyo International Airport at Haneda to the United States will be increased from the current 12 to 36. The ministry plans shortly to make decisions on the remaining spots, after negotiations with other countries.

FILE - In this July 8, 2015, file photo, United Airlines planes are seen on the tarmac at the George Bush Intercontinental Airport in Houston. United Airlines says a disruptive passenger on a flight from Shanghai to New Jersey was asked to get off, resulting in an unscheduled stop in San Francisco and an arrival delayed by eight hours. Videos on social media showed an unidentified elderly man wearing a red "Make America Great Again" cap heatedly insisting that he was entitled to a seat and yelling at fellow passengers.

United Airlines will pay $2.4 million to settle with SEC

The SEC said that Continental Airlines had dropped the route before its 2010 merger with United, and another analysis by United showed it would still lose money. But the SEC says that the airline approved the flights anyway to win port authority approval of a hangar project at the Newark airport.

FILE- In this June 2, 2016, file photo, United Airlines CEO Oscar Munoz delivers remarks in New York, during a presentation of the carrier's new Polaris service. Video of police officers dragging a passenger from an overbooked United Airlines flight sparked an uproar Monday, April 10, 2017, on social media, but United's CEO defended his employees, saying they followed proper procedures and had no choice but to call authorities and remove the man.

United just can't catch a break from its terrible, horrible, no good, very bad PR nightmare. In the past few weeks alone, United Airlines has found itself at the center of numerous controversial stories, the biggest being when it violently removed a passenger from an overbooked flight earlier this week. The incident ignited an outcry across the internet when video surfaced across social media. The company issued a series of statements following the incident, which didn't exactly come off as apologetic, and the internet, again, roasted them for it. United then released a full apology, but two days later -- after the company's stock tanked.