SAN FRANCISCO -- Are people sharing less on Facebook? Facebook says no, but published reports allege the world's largest social network is battling steep declines in how much personal news people share. Facebook has set up a team in London to figure out how to stem the double-digit decline in the sharing of "original" posts among Facebook's 1.6 billion users, unnamed people told The Information. Sharing of personal news, rather than news articles or Internet memes, fell 21% year over year as of mid-2015, The Information reported. Overall sharing fell 5.5% year over year as of mid-2015, so Facebook also had fewer posts overall to show people in News Feed, the publication said.

The bots are coming! Mark Zuckerberg shows off Facebook's smart AI assistants and says smart augmented reality sunglasses will be available 'within a decade'

Facebook is worried that its more than one billion daily users are sharing less with one another. It's not that we are sharing less overall; we're still sharing lots of links to news articles and commentary, cat pictures, and hilarious Vines. But instead, a dedicated team at Facebook is trying to work out why we are sharing less about ourselves. After more than a decade of picking up "friends" – everyone from your BFF to your grandmother to that guy who lived down the hall in your dorm way back in your first year of college (what's his name again?) – we've decided that maybe we're not 100% comfortable sharing intimate details of our lives with such random and disparate groups of people. Facebook employees are blaming something called "context collapse": where people, information or expectations from one context invade or encroach upon another. 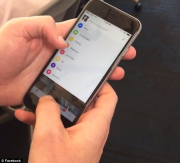